Where The Road Ends (Venezuela); a Boat Trip in the Orinoco Delta

When studying the map of Venezuela my eye was constantly drawn to one particular corner: that of the Orinoco Delta. The drawback for an overlander: there are no roads or anything resembling them.

Driving to the Orinoco Delta

We decided to go nevertheless.

For three days we surrendered our independent way of traveling and let us guide by people who know how find their way around waterway labyrinths and in sprawling forests. In San Jose de Buja we left the Land Cruiser in the garden of Victor, one of the owners of the Delta Eco Camp, and packed a mochilla.

The relatively few people who live in the delta are the Warao People. While they have traditionally moved around in dugout canoes, over the years some of them have bought or received an engine-run, aluminum boat as well (I was told this is a popular gift from the government to buy votes in this region).

Boating in the Orinoco Delta evoked images of our multiple-day boat trip in the Sundarabans, the enormous delta of Bangladesh (here’s more about our trip in Bangladesh): you’re constantly closed in by green walls of forested islands. It makes it hard to spot big animals and we didn’t get to see any these days except for a couple of turtles, and we saw very few birds.

The Orinoco Delta (at least this corner) is not the place to go to see wildlife. The charm lies in many other areas.

Home & Lodge in the Orinoco Delta

After about a half-hour boat ride we arrived at the camp along the crossing of two rivers. It is built in Warao style with open-sided platforms on stilts – palafitos – and roofs made of tempiche palm tree. It is quiet and peaceful place to linger for a couple of days.

The place is informal with workers and guests sharing meals that are prepared in the basic, open kitchen with blackened pans on gas. Rustic is the word. Bathrooms and showers are shared and come with cold water from the river. No TV, no WIFI – bliss.

The Orinoco Delta Eco Camp was our base from where we explored the area. Antonio was our guide and we shared the boat with visitors from France and Trinidad and Tobago. Our yellow and green boat has a powerful engine to quickly cover long distances.

And thus we went to the best spot to go piranha fishing, visited one of the bigger Warao settlements, boated to the camp’s finca – farm – where they cultivate produce and keep livestock, and from which we daily watched the sunset while savoring a cuba libre (read more here).

In many places water hyacinth named bora clogged the waterways. When there was no opening, Alfredo, our boatman, accelerated and crossed the hyacinth island with the engine pulled up from the water surface to prevent the plants from blocking the rotating blades.

Alfredo has lived here all his life and knew the waters. For him there is no need for maps or a GPS. Learning to navigate the waters starts at an early age. Kids, including toddlers, spend days paddling and playing in dugout canoes nearby home.

Finding Your Way in the Jungle

One afternoon Antonio took us to the jungle. Alfredo steered the boat into a stream and halted at the shore. There were no hiking trails, no indicated path whatsoever. We hacked our way through dense vegetation with Alfredo doing the cutting with a big machete.

Parts were extremely muddy in which our boots sank almost until their edge and were hard to pull out again, easily putting us off balance. Of course there are a zillion trees to hold on to, that is if they aren’t covered in nasty spines or home to spiders and other biting creatures. It was a delicate game of moving forward.

Walking here made me think of the movie Papillon, the film’s main character who survived the brutal penal colony of France in French Guiana at the beginning of the 20th century (I wrote more about him here). There is one scene where the prisoners have to cut trees and haul trunks from the forest, all by hand. Many died from this excruciating labor, either from exhaustion or animal bites. In the movie I could see why; now I understood even better (the movie is based on the book Papillon).

Antonio pointed out a pela manciho, the bark of which is used to cure fever and diarrhea. The forest is home to the temiche tree, of which the leaves are used to make roofs. The same tree also grows a kind of fruit or nut that locals cut open and from which they drink the somewhat tangy water. Behuco de agua are lianas that they cut and to sips its liquid that tastes like water. No need to bring water to the jungle if you know where to get it!

This reminded us of the story of Razali, a jungle survival instructor in Malaysia we had stayed with. “In the tropics,” he said, “you don’t need anything in the jungle except a machete. The jungle feeds you and has sources to give you safe drinking water, including ones that will help keep your body temperature from heating too much.”

He had been invited to Belgium for a winter hike in the Ardennes. He hated it. “Your forest doesn’t have anything to help keep you warm or to feed you,” he had concluded.

As I was struggling to move forward I held up the group. They stopped and waited for me. Alfredo, meanwhile, walked on and we lost him in within minutes. Antonio took a turn right where we should have gotten left. After calling out to Alfredo we regrouped, but it made us realize how easily you can get lost in the jungle.

It was time to return to where we know how to find our way around: the road!

Thank you Victor and Hani, for having us and sharing your stories with us. Thank you Fabricio and Ainhoa, for introducing us. We hope our roads will cross one day! 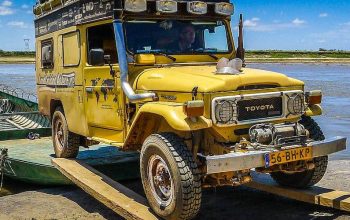