After a five-week stay with our families and friends in the Netherlands, our days in Japan have been on a rollercoaster. It’s hard to believe we’ve been back for two weeks already. So many great things have happened.

And all that within the short distance between Mount Fuji and the cities of Toyota and Nagoya. No wonder we continue not exceeding an average of 50 kilometers per day.

On our return we joined one of Japan’s biggest Land Cruiser events, the Land Cruiser 40 Meeting East. Expect a full blog post on this with many photos in a week or so.

As I am writing this, we are hosted by a wonderful American family, whom in fact we met at the event I just mentioned. They will live here for 3 years while Will works for Toyota, Emily, Gage, Nora, and Collin go to the International School, and Jennifer is busy managing everything for and around this big, active, and fun family.

Arguably one of the biggest moments of our stay in Japan, if not on our journey, was to return to our Land Cruiser’s place of birth. Not just the country. Not just the city – called Toyota, by the way. But to the factory where it was assembled in 1984. Production of the 40 series was ending around that time, with the last one being manufactured around 1986.

There are a number of Toyota factories in the country and there is one in Takaoka that is open to the public. However, visiting the Toyota Auto Body factory in Toyota (yes, that is the name of the town) is quite another matter. People in the Land Cruiser community helped us get an organized tour.

Thanks, Masa (Cococruiser) for initiating this, Mr. Muramatsu (Cruiserland) for taking us, as well as Mr. Okyuama who was kind enough to join us as a translator.

At Toyota Auto Body factory [website] they currently manufacture LX570, the 70 series, and the 200 series. Unfortunately we were not allowed to take pictures inside (but Coen took lots of notes) so here are the few shots of the exterior and the entrance.

After the visit Mr. Muramatsu and Mr. Okuyama took us to an off-road park [website] near Nagoya where we shared lunch and had a rough off-road spin in a Mega Cruiser.

If that was not enough, people in the Land Cruiser community got us invited for a visit to the Toyota Automobile Museum [website] where we got a super informative guided tour by Mr. Towaki from the curator’s team.

I (Karin-Marijke) am not particularly a car aficionado by any means but I will say that this is one of the best and most beautiful museums we have ever been to.

The display of some 130 cars (of the 750 that the museum owns) is professionally done and the English audio guide is excellent.

From hundred-year-old cars to the best-known vintage cars, and from the fanciest sports cars, to a display of European, North American and Japanese cars of the 20th century, it was all there.

Fortunately, Coen could take photos here and thus now has some 200. Here are a couple of his favorites. Let us know which one you like best.

We’ll hang around in and around Nagoya for a bit and look forward to a HASH meet-up this Sunday!

Check out: The Landcruising Adventure in Japan T-shirt Collection 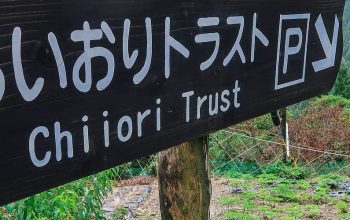 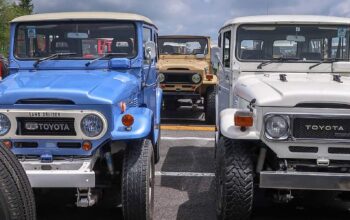