“You have to go to Los Llanos!” I didn’t keep count because the number of times people in Colombia cried those words was simply uncountable. In retrospect, most of them were from the mountains but they appear to be in love with the plains.

And plains they are: Los Llanos encompass a vastness of the flattest grasslands and savannas you can (or cannot) imagine, stretching all around you for hundreds of miles on end.

Most of our advisers from Bogotá are avid off-roaders. They hit the plains in the midst of the rainy season, testing the extremes of their vehicles and their personal endurance. Photos of their trips are spectacular indeed.

At 3.30 pm we finally left the mountains behind us, reaching a turn-off at Pas de Ariporo, north of Yopal. We left the asphalt and Coen aired down the tires and we hit a horrendous, jagged road. 10-to-20-cm-sized stones protruded from the surface, which was worse than the washboard. We were bouncing up and down while the Land Cruiser squeaked and rattled.

What a job for all those truck drivers who daily ply between oil rigs deep in Los Llanos and to wherever they have to bring the black gold to. For years there have been plans to asphalt this road but according to locals corruption has been the main – if not the sole – cause for delay.

Thank heavens we had bought new tires in Bogotá (read about it here); the old ones wouldn’t have lasted ten minutes on this road. Screws started falling down. The first fell on the windshield wiper. Coen tried to retighten it above the windowpane but to no avail. It had broken off. Five minutes the screw from somewhere above my door/windowpane fell on the floor mat.

We traversed a world of cattle ranches. Fences denoted ownership: white with blue-tipped fences belonged to one; black with red-tipped fences to another (we assumed).

It became a bit of a frustration these days: fences all over the place, cutting lines through otherwise beautiful landscapes and somehow giving it a much more developed feel than thought this area would be. It also made finding rough camps a time-consuming issue.

The cows were a kind of cebu, the white/grey beasts with the big fat lumps on their backs. Few ranches offered the animals shade from trees.

I  was the first to spot them: capybaras! Nearby were caimans that shared the territory with small freshwater turtles. Several deer! We were elated. This made up for all the hardship.

We came across a side road and took it. Ten minutes later we had spotted an area without a fence. Coen bounced a bit farther into the field so we were out of sight from the road, unintentionally chasing a family of capybaras away in the process.

With the sun coming up and the hurler monkeys crying their morning song, I enjoyed a bit of yoga in the shade of a tree in a pleasant early morning breeze. Meanwhile Coen fixed breakfast. We had all the time in the world. After some hectic weeks it felt like luxury.

The discomfort of the driving was amply compensated by the view of birds and other wildlife: mostly spoonbills, herons, capybaras and caimans.

According to the GPS we should take a track going to the left, but that ran behind a fence and onto a ranch. Fortunately, we met three llaneros – cowboys. They said to stick to the main road and ask for directions in the next village.

More wildlife: ibises, Jesus birds, a stork, caracaras and more caimans and capybaras. Also freshwater turtles and quite a few deer. You now understand the mileage: we stood still for long periods on end, admiring animals that sat right along the side of the road. It was a mesmerizing day.

We passed an oil rig, which also had an airstrip. First we spotted major storage cylinders, and a bit down the road we noticed flames from a gas pipe, indicating the extraction of oil, images reminiscent of our drive down the Vía Auca in Ecuador. From here oil pipes ran along the side of the road for a while until they ran one way and we took a turn-off the other way.

Everything was fenced in and finding a bush camp was far from evident. As soon as we did come across an open stretch, with lots of bushes and low trees, we immediately called it a day. We followed a sandy track into the shrubby woods to an open, grassy spot.

Sun, breeze, dry air, shade. Just perfect. We opened all car windows, doors, as well as the hood for the Land Cruiser to cool down. Time for a shower, a yerba mate (we still love that Argentinean tradition), and our Kermit lazy chairs. We felt the richest persons in the world!

Read More: The Essentials Series – Camping Chairs for Your Overland Journey – The Pros and Cons

driven: 3 hours, 52 kms (and then spent a lot of time waiting for the ferry)

More deer when we left in the morning, and more unpaved, laterite-kind of road followed. My door started falling open; the lock seemed bust. We navigated using the GPS on an iPhone with maps of Open Street Maps via MapsMe Pro and tracks from ColRut (similar to Mapear in Argentina), as well as Google Maps. Sometimes one track was more accurate, sometimes the other.

Blue sky, white clouds, green fields, red road, yellow Land Cruiser. Quite colorful. Laterite changed into sandy tracks. This, in terms of off-roading was the best stretch of this trip, reminding us very much of the savanna in Suriname. We opened and closed a dozen or so fences, checked with locals if we could cross their terrain – “No problem, just close the fences” – and simply had a lot of fun being here.

Around noon we reached the village where we would take the ferry. While eating lunch in a roadside restaurant the owner told us that here they don’t eat caimans but do eat capybara. “Very tender and tasty.”

We needed to wait three hours before the ferry took us across. Our Land Cruiser was the only vehicle. On the other side were three soldiers and a boat. They couldn’t give us directions. “We know only the river.”

Five minutes of driving brought us to a small harbor lined by open bars where locals drank beer and music blared from boxes, but all was quiet at 10 pm. We camped along the shore. It was an idyllic spot except for the jejenes (kind of sand flies) that attacked us full force.

Primavera, the first town we came across, is home to some 5,000 people. Streets were asphalted. It is a town where nothing happens but that is a safe place to live. Crime hasn’t penetrated here, locals said. We bought some cakes and cookies at a panadería. Back on the road. Parts were laterite, other stretches sandy. Nice to drive.

Again – like on the Transamazônica – we were shocked about how much terrain is burned down just for cattle raising. It is one of the most polluting industries in world, worse than the transportation industry.

We stopped in the shade of a tree for lunch. I cooked rice, lentils, beans in the pressure cooker and Coen prepared peanut sauce. We felt sweaty and dusty. When spotting a black-water stream we stopped for a bath. We felt reborn.

It was not a good spot to camp though and so we drove another two hours during which we stopped for coffee (tinto) at a truck stop – an open space with plastic chairs and a blaring TV. The truck drivers were enjoying a beer and would afterward simply hit the road again.

When the sun started to set we came across an open field, and discovered yet another magical campsite. We needed it. We were exhausted. The inside of the Land Cruiser was covered with dust and needed to be cleaned before we could sleep, and the bites from yesterday’s jejenes were driving us nuts.

A beer from the fridge compensated a lot.

Cloudy morning. Perfect. We rummaged around for a bit, cooking and reading and didn’t leave until 11 o’clock. A monotonous drive followed. A laterite road traversed more cattle ranches that were either black or on fire: the slash-and-burn season was in full swing. No wildlife to be seen anymore.

We crossed a bridge and I spotted a trail meandering down. Time for a bath which we thoroughly enjoyed despite more jejenes ashore and tiny fish fiercely biting at our skin when swimming.

Back in the car, the ventilators stopped working. Coen took a deep breath. We took a turn off to La Venturosa in the hope of finding a roadside restaurant. No such luck but we did meet Margarita, an elderly woman who allowed us to camp on her terrain under a huge mango tree and with a view of the river.

That afternoon locals came here place to drink a beer and listen to folklore music. It was a super relaxed afternoon to wind down a bit, Coen in his favorite spot: the hammock.

Monotonous hours of driving. Endless, straight laterite road cutting through vast ranches hemmed in by fences, and, later on, man-made woodlands. It did become a more undulating landscape at some stretches which offered different views.

Nevertheless, saturation had set in. Around lunch we reached Puerto Carreño and were relieved to have reached our destination.

We got permission to camp at the Bomberos, the fire station, blissfully unaware yet that we would be here for the next twelve days to get our paperwork in order before we could cross into Venezuela. 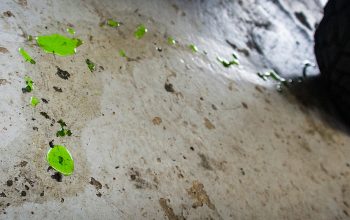