In our Japan Overland Travel Guide we discuss a lot of things about overland travel in Japan, but money is not. For this we have this blog post, showing you what we roughly spend on what. Of course, we all have our own budgets and levels of comfort, but maybe/hopefully it will give you an idea of what you may expect.

Enjoy! And if you have questions, feel free to do so in the comment section below!

Our Overland Information Pages for Japan consists of two parts, the Japan Overland Travel Guide and this is the Japan Travel Budget Report.

All 7-Eleven convenience stores have an ATM and, during our 9-month trip from Kyushu to Hokkaido and back, they always worked (Dutch, Rabobank debit card). Ergo: they are reliable. There is no charge, which is a bonus.

Note that in the upper corner of Honshu, north of Aomori, and in the southwestern corner of Kochi (on Shikoku) are no 7 Elevens. Other than those two areas, we never had a problem finding one.

Apparently, ATMs in other convenience stores don’t accept foreign credit and debit cards, however, we didn’t check this.

Not included: health insurance, electronics, flights to the Netherlands

Notes on the Japan travel budget:

Ergo: our budget didn’t go through the roof as a result of 3 things:

Check it out: The iPhone Cases & Skins Collection

In Hiroshima we got our first visa extension at the Immigration Office (gps: 34.401592, 132.463670). This was not a matter of course; each application is judged individually.

We filled in forms given to us at the Immigration office, in which we explained why we wanted/needed the extension. They gave us a 90-day extension for which we paid 4000 yen per person (about US $35).

We got a 3-month visa on arrival, free of charge.

In Kochi, we tried the second extension. This was denied. It was only then that we learned that officially you can stay for 180 days (6 months) per calendar year. We had already gotten 7 months so that was it.

However, we got one last extension in Miyazaki when we learned that the ferry back to South Korea was out of order and would only operate again days after our visa would expire. A local friend did all the calling for us, and getting papers from the ferry company to prove these were circumstances beyond our control.

They gave us a 15-day extension, which was enough but for we did have to pay another 4000 yen.

When you arrive by ferry, you will receive a 1-year Temporary Import Document (TID) on arrival. We ferried from Busan (South Korea) to Fukuoka (island of Kyushu), which you can read about in our Overland Japan Travel Guide.

When you ship your car by container, we have been told, a Carnet de Passage is needed. Overlanders who may have more info on this for you are Henk en Marianne (find them here).

Note that cars registered in Germany, Slovenia, Monaco and Zwitserland cannot drive in Japan (These countries did not sign the Geneva Convention; they signed the Vienna Convention).

You can get third-party insurance on arrival. However, it’s more expensive than this one, which we organized through email:

Mr. Saori had sent the paperwork to the nearest post office and on arrival at the port of Fukuoka Coen walked there (10 minutes) to pick up the policy, and a sticker to the put on license plate at the rear of the car, proving us with a Japanese car insurance.

1. Mr. Nakashima, owner of Friendee Auto
He has his workshop north of Kagoshima (Kyushu Island)
tel: 0995-62-0753
http://friendee.jimdo.com
Mr. Nakashima does not speak English.

2. Masanori Hikiba, better known as Masa, owner of Coco Cruiser
He has his place in Minamiaso, south of Aso (Kyushu)
tel: +81-90-988 or 638
Masa speaks English, as do his wife Yasuko and son Masaya.

Work was done on the Land Cruiser

All maintenance done at Friendee Auto by Mr. Nakashima and his team is too much to write about here, but this summery will give you an idea about the scope of it:

2. Masanori got us second hand, studless tires for the winter.

3. The clutch broke when on our way to the snowy winter of Japan. Taku drove 180 kilometers (one way) to help us. After he got the Land Cruiser moving again, he offered a full diagnosis at his workshop.

Here the men found the cause to be a broken spring on the pressure plate. Taku offered us his second-hand Dyna clutch.

Check it out: Our Land Cruising Adventure in Japan Collection

Since the Land Cruiser returned to its country of birth, it (and thus we) got a lot of attention, particularly from the Land Cruiser community throughout Japan. They organize a number of events throughout the year on Kyushu and Honshu, and we were able to visit the factory where our Land Cruiser was built in 1984.

Prices vary enormously: 92 to 140 yen for a liter of diesel. There is no logic in cities or rural areas being cheaper or more expensive, nor is one island more expensive or cheaper. It simply depends on the individual gas station.

Having said that, Eneos gas stations were expensive. We generally found Esso to be the cheapest, but there are not many of them.

While you can use the bathroom at the gas station, there are no other facilities such as the sale of foods and drinks.

For bathrooms: throughout Japan you’ll find many public toilets, in and outside cities. They are clean, have toilet paper and running water. Another option is convenience stores, which all have public bathrooms.

The latter are also perfect places for a quick snack or a cup of coffee. I wrote more about convenience stores here.

We have used ferries (which are expensive) as described in our Overland Japan Travel Guide. Other than that we used a few rail/metro systems in cities such as Fukuoka and Kyoto.

There are always people around you willing to help to buy a ticket and such.

Sightseeing in Japan can add up to your budget. UNESCO sites, museums, temples in tourist places such as Kyoto and Nikko all have fees that are generally starting at 500 yen and go up from there.

But since outside those areas there are enough places to see free of charge, we feel we got to see enough historical, religious and otherwise cultural sites to get a good impression of the country.

Arguably our favorite visit, however, was the Land Cruiser Factory, our home on wheels’ place of birth, where the Land Cruiser Community organized a private tour for us. Read about it here.

We camped a lot, spending many nights at michi no ekis but hope to do more rough camping this summer.

Everything mentioned minus what we totally spent is what we call daily expenditures. This is mostly groceries and going out for lunch/dinner.

Don’t forget to check out our Overland Japan Travel Guide as well with lots of additional information! 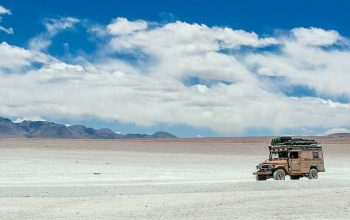