Why visit Hokkaido in winter, when it’s covered with meters of snow while you could also spend that time in Kyushu, Japan’s southernmost island with a mild winter climate?

After having spent 7 weeks in the heart of Hokkaido’s winter – January / February – and having thoroughly enjoyed it, we’d like to tell you why. Here’s what Hokkaido has on offer for you when it’s beautifully covered with snow.

For one, Hokkaido is heaven for those who like to ski or to hike in snow. While many parts of national parks are closed for winter,  a number of fabulous areas for hiking remain accessible. Listening to the crunching of snow under your shoes while walking under a blue sky (hopefully) and the cups of hot tea and a good ‘onsen’ (hot bath) afterward make for a simple, very achievable adventure in Hokkaido in winter.

For two, exactly because of the freezing temps, the island has a fair share of fantastic snow-and-ice festivals.

For three, Hokkaido has a lot of wildlife. In winter, against the white background, the deer and red foxes are easy to spot, while other animals come to Hokkaido because it’s warmer here than the much colder Siberia. Among them are many geese and those super elegant, entrancing crane birds.

Things to do in Hokkaido’s Winter – Hiking in Snow

We didn’t go skiing in Hokkaido, but here is more info on the subject. However, we did go for (short) hikes and here are some suggestions:

1. Hiking along the Frozen Blue Pond

This man-made lake is blue as result of natural minerals in the water. That’s fascinating as it is, but the blue water stands out even more in the white, snowy landscape. From here runs a path to the village of Shirogane Onsen along the river, parts of which freeze and other parts that remain open due to hot water flowing from a spring.

At night, return to the lake when it is in a myriad of changing colors. While tacky, it adds a touch of mysticism to the bare trunks protruding from the frozen, white surface.

The Yumoto Shirogane-Onsen Hotel in the village has hot-spring baths, which is a good place to warm up afterward.

Check it Out: Our Winter Hoodie Selection

2. Hiking in the Igloo Village at Lake Shikaribetsu

Daisetsuzan National Park becomes largely impassible in winter, at least for hiking with many of the trails closed off. Some locals know how to enjoy winter though and build an igloo village on the enormous Shikaribetsu Lake in January when the ice is thick enough. It’s a tradition that started in the 1980s.

Have a drink at the enormous cafe/bar igloo, where you can get a drink served in a glass made of ice (one-time use). Take pictures with your spouse in the chapel igloo. At night watch the stars on the bench of the open-roofed igloo, protected from the wind by the ice walls.

Or, what we liked best, take a dip in the super hot, open-air hot tub.

You can hike across the lake as far as you want, although the lake isn’t kept clear of snow beyond the igloo village and walking here may be tough (bring snowshoes) – the sceneries are very rewarding. If you’re tired of hiking, take a ride on a snow-mobile, which can be rented in the village on the shore.

The village is home to the towering Shikaribetsu Kohan Onsen Hotel Fusui, with rooms looking out over the lake which also has a hot-spring bath.

Read More: Why Travel in Japan is Fun, Easy and Affordable

This so-called Phantom Bridge dates from the 1930s, as part of a railway line. When a dam was constructed in the 1950s, the area flooded, and the railway line was rerouted. These days the 11 arches disappear underwater early summer when the water level rises due to rain and melting snow. In winter, the water levels drop, the water freezes and you can walk across the lake to the bridge.

The bridge isn’t particularly beautiful by any standards, but the walk is gorgeous. We found it perfectly to hike on regular boots, others opted for going on snowshoes.

Things to do in Hokkaido’s Winter – Snow & Ice Festivals

By far the biggest and best-known snow festival in Hokkaido, the annual event in early February attracts around 2 million visitors. This sounds like an awful lot, and it is, however, thanks to the tightly organized structure, it doesn’t feel like you’re melting away in those crowds.

The festival at Odori Park has different sections, among which enormous pieces built by the military (a life-sized Arc de Triomphe when we were there), a competition for snow-sculpture artists and locals, and a competition of ice sculptures.

By far not as big-scale as Sapporo, but the charm is in the location. Also called the Snowlight Path Festival, Otaru is a town to go for a stroll in the evening when the river is lit with lanterns and many people place tea lights in their snow sculptures.

Not attracting the crows like Sapporo, but it does include some big-scale, impressive snow sculptures. What we liked in particular was the location of the super gorgeous, detailed ice sculptures, which is within walking distance from the train station.

Whereas in Sapporo the ice sculptures were unattractively displayed in the middle of a street, way to close to each other, in Asahikawa the ice sculptures stood spread out across a pedestrian street, allowing each one to shine and glitter as it should.

4. Other Winter Festivals in Hokkaido

There are more winter festivals in Hokkaido and not all are about snow sculptures. We came across a dogsled race in Wakkanai, and a tree-trunk pull race in a village, which was great fun.

Ask around at tourist information centers for what is happening where and when! Or check Google; every year you will find calendars with snow festivals for that year.

Things to do in Hokkaido’s Winter – Birdwatching & Wildlife Viewing

Lake Kussharo is a caldera lake in Akan National Parks and is the 5th largest lake in Japan. It’s a safe haven for thousands of whooper swans that fly from Siberia to stay here for the winter. While large parts of the lake freeze over, the hot springs prevent parts of the ice from forming, giving the swans enough open water for a swim.

And yes, in some places, parts of the water have been closed off so you can sink your cold water in one of the scaldingly hot natural onsens (hot baths) amidst the amazing scenery of the snow-covered lake.

Lake Furen is a wetland on the southeastern side of Hokkaido. Around this brackish water lake, as well as on the peninsula with the town of Nemuro, we saw lots of deer, foxes, as well as birds of prey such as eagles.

Arguably the most fascinating animals to watch are the crane birds, also called Japanese birds. They were long thought to be extinct but seen in the 1920s in the marshlands of Kushiro. In winter they come to feeding sites around the marshlands, and those are the easiest places to watch them.

Unless you have your own wheels and can drive their independently, best go to the town of Kushiro on the south side of Hokkaido, and organize transport from there.

For the bird watchers: Here is an overview of birds in eastern Hokkaido.

Resources to Prepare your Overland Trip in Japan

To get the best information about other places to visit in Japan, check out:

Check it Out: Our Landcruising Adventure Coffee Mug Collection 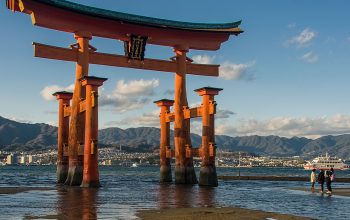