Life in the Chaco, Argentina’s Wilderness

“Another 70 kilometers into the Chaco?” Coen gasped after the service station attendant had taken a good look at our roadmap.

It was 4 pm, the 100-degree Fahrenheit was killing us and we had already driven too many miles. We were now about to enter Argentina’s northern wilderness, called the Chaco, where a blacktop surface would make way for sifting sand.

It was easy to convince Coen. The attendant had already hinted we could camp here and even take a shower. A cold beer, the sun setting in spectacular colors and life was good again. Well rested after a good night sleep, we readied ourselves for a world without power lines. The Land Cruiser easily found its way through the sandy back of beyond. In fact, driving here was quite different from the stories we had heard about this road.

At times tractors are the only vehicles that can plow their way through this inhospitable region of shrub and meters-high cactuses that characterizes the Chaco. Before we knew it we were driving into the communal area of the mission, surrounded by forest yet within walking distance of the Bermejo River.

“Hello! There you are, at last!” someone shouted in perfect Dutch. Months earlier, in April, Katrien had asked us when we would visit. We had met her when staying with Ida van Mastright, the Dutch Consul in Argentina, who lives in Tres Arroyos. The two women had known each other since childhood and were now in their seventies.

She had seduced us to visit her in the Chaco with stories about caimans, poisonous snakes, indigenous people, bush country, unbearable heat, and destructive thunderstorms. We had answered we would probably reach the Chaco in June; it was now October.

“We got distracted. It happens.” The small mission consisted of a church, a school, a boarding house, and a medical center. Just outside the mission the missionaries grew vegetables and reared animals. Katrien had worked and lived here as a nurse for the past 40 years. She was born in the Netherlands and had crossed the ocean to Argentina as a young child.

As a young woman decided to do missionary work in Africa, however, a minister told her that Argentina had more than its share of poverty and people in need of help. To reach this remote community to check it out she had depended on trains and a tractor; roads were non-existent. The minister had been right and she had changed her plans. Katrien lived in a tunnel-shaped house with her dog Sarah and two cats named Mitsie and Mitsie. Almost every cat in Argentina is named Mitsie. Solar panels adorned the outbuilding that contained the shower, toilet and laundry machine. In her garden, amidst grapefruit trees – the only fruit trees that grow here – towered a windmill that kept her little fridge full of valuable medicines.

From time to time Wichí people dropped by to charge their cellphone since Katrien was the only one who had electricity twenty-four hours. The community did have a generator providing the community with four hours of electricity in the evening. Her medical center and sickbay stood some eighty meters from her house but many people were impatient. When enjoying our midday meal patients regularly dropped by, clapping their hands at the front gate. Where we would call out or ring the bell, in Argentina it is common to clap your hands to get somebody’s attention.

“Oh boy, how nice. I appreciate a little applause,” Katrien never stopped joking before running out to ask whether it could wait till after lunch. During this time of the year, noonday sun killed all activity in the Chaco. We so adapted by lounging in hammocks and sipping from tereré, a version of the Argentinean herb tea called ‘mate’ but which is served cold instead of hot. Katrien’s freezer running on gas stood always contained a couple of plastic bottles filled with rainwater for this purpose.

That is if it wasn’t filled with caiman or some other animal that had been shot, providing her and neighbors with meat for a long time. There was no running-water system; the water they got was from wells or what they collected during the rain.

Check Out: Our Recommended Books on Overlanding At the end of the afternoon everybody slowly woke up from their slumber. Coen would join the men for a game of soccer, three to three on a concrete ground, with women and kids cheering them on. I preferred going for walks. Parrots flew screeching through the air. I hiked passed homes where pigs, goats and chickens were kept in pens and wove my way through the forest to the lake.

Every once in a while I had a short exchange of pleasantries with a Wichí inhabitant but very few. They were shy, kept away, and some didn’t speak Spanish but only their own indigenous language. The lack of contact with local people, apart from those living inside the mission, was amply made up by these walks the outback.

I studied the intricate nests that hung from many branches; as the bird’s family grows the birds extend their nest with extra ‘chambers’ until the construction becomes too heavy and drops on the ground. The wilderness of the Chaco is beautiful, clean, and void of any sign of civilization, however, most of the wildlife has been shot. For centuries the indigenous were boss over their own lives; they killed only what they needed and nature could recuperate. Colonization forced the nomad indigenous to settle down and nature could no longer keep up with the hunting.

Most wildlife is gone although sometimes a caiman would still find its way to the village, where locals kill it instantly. But snakes still lived here in abundance and I daily saw them. I could have taken lots of pictures but decided not to take a camera on these walks but instead focus on watching only. During one of these afternoons I witnessed two snakes fighting. While I stood watching, mesmerized, mosquitoes were plaguing me but the moment I moved to scratch a leg, the big snake eyed me. It felt as if it was demanding me to stand still.

It was eerie. The moment I stopped my movement, the snakes continued their battle. The loser was a thin, grey snake with dark spots, about a meter long. The winner was a 2.5-meter water snake and obviously it was no equal match.

Read More: Hiking in French Guiana; Watch out for Snakes However, each time the big one had thrown part of its body on it, the small one managed to wriggle free again, yet it was a matter of time before the big one started swallowing the small one. Suddenly a third snake jumped up and fled into the shrub. It was another small one. Was it fleeing as it realized its mating partner was being eaten? It was quite a spectacle to watch. The Story about Winter and a Fisherman

Being in a mission meant going to church. We are not churchgoers but Katrien invited us to join nonetheless. Our Spanish was limited to everyday words but I had grown up in a community with very conservative Protestants so I could pretty well guess what the Hell and Damnation talk was about. Coen, on the other hand, had no clue. When 1,5 hours later we finally returned home he asked me, “What was this story about a fisherman in the winter?”

I looked at him and tried to figure out what he was talking about.

“Okay, so what about the fisherman, the pescador?”

“The minister wasn’t talking about a fisherman (pescador), Coen, but about a sinner (pecador),” I answered. The mix-up of words made for a good laugh with the missionaries.

Another lesson of Spanish learned.

“Oh, what a bummer. All the while I was thinking that the minister was giving a beautiful talk about a fisherman in the winter,” Coen dryly commented.

Read More: Where to Go in Argentina – Our Favorite Places and Activities We spent days with kids in the boarding school who came from indigenous communities that lived too far away for daily commuting. In the mission people lived with limited television and without the Internet. The kids were taught only the creation theory and their world-knowledge was extremely limited.

For example when we gave a slideshow about our journey, we told them about the problem of mines in Cambodia. We got blank stares until a teacher pointed out that first we would have to explain what a mine was. Our stay gave insights into living in Argentina’s outback as well as how the government deals with these communities in the Chaco. There was no bank but they the villagers did need money. Once a month, government officials brought pensions and child allowances to the village and handed them out in cash. The president was coming to a nearby town for an ‘acto’ – a big speech in front of a huge audience.

To give the appearance of the president being popular, 10,000 people were needed to fill the plaza. The government buys poor people to be there by giving them a free ride to town and a meal. Even sadder is the fact that the same thing buying of people is done during elections. Back on the Road

The days passed quickly. Weather changed. The rainy season started with thunderstorms. Law stated that all ‘roads’ (trails) in the Chaco were closed for 24 hours after it stopped raining to prevent them from being damaged too much. The sanction was the equivalent of 150 liters of petrol – with a history of inflation, Argentina calculates certain fees in the equivalent of a valuable product rather than in pesos.

Our intended two-day stay in the Chaco had turned into a month. When the roads were clear once more, we packed our home on wheels, said our goodbyes and hit the road again, forever in search of new adventures and new meetings.

Read More: How to Deal with Traffic Police in Argentina Thank you Patrons for your support, which helps us create stories and videos for you.

Please join the wonderful crowd that supports us on Patreon and see what benefits we offer in return. 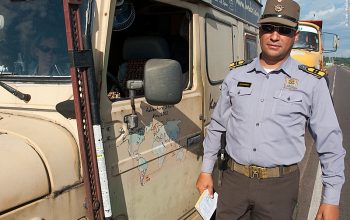