The Bandeirante is Alive – Meet the Brazilian Land Cruiser

Land Cruisers produced in Brazil, equipped with a Mercedes-Benz engine and called Bandeirantes?!

What started with a perplexing photo in Uruguay grew into a fascinating story in Brazil.

In 1984, Toyota Japan stopped producing the famous Land Cruiser 40-series and with it ended the era of a truly venerable 4×4. As Coen likes to say:

Our BJ45 is the ‘Last of the Mohicans’

Production of the 40-series in Brazil

What few people know is that in Brazil the production of the 40-series continued until 2001. In 1959, the first Bandeirante, as the Brazilian version is called, rolled off the production line. People are still debating what gave the vehicle its name. Speculations are that the word ‘Bandeirante‘ is somehow related to the words ‘land cruiser‘ or ‘pioneer‘ in Portuguese.

We, for one, didn’t know all this when we started out on our Landcruising Adventure in South America, and in fact a particular red BJ45 pickup in Uruguay had baffled us for quite a while.

to law you can’t export antique cars and as a result, the country is a living museum of vintage cars varying from wrecks to show pieces in mint condition.

Coen had the time of his life photographing them, including what he thought was a BJ45 pickup. However, studying that photo on, he discovered it was a fake. A couple of things didn’t make sense and he couldn’t stop thinking about it. It took a while to figure out that this was a Bandeirante, a type of vehicle we had never seen.

Fortunately, we were on our way to Brazil where we would see lots of these popular vehicles and learn all about them.

Weeks later we met Regis, an amiable Brazilian who had found us on the Internet and invited us to a churrasco – a typical Brazilian BBQ.

“Okay, let’s go get some drinks. I forgot to buy . You drive,” he said while throwing Coen the keys of his 1980 Bandeirante.

It was almost a mission impossible to round the corner with this short-wheel-based vehicle. The Bandeirante lacks power steering, plus Regis’ car sported big fat tires. The dashboard looked different from our Land Cruiser’s, and the engine definitely sounded odd.

Regis was proud of his Bandeirante and had plans for it: , roof rack, shortwave radio, and even wider tires were among the projects we discussed. When he opened the hood, Coen stepped back in surprise: he was looking at a heavy, green engine with an only too familiar three-pointed star: this was a Mercedes-Benz engine!

“Yes, of course,” Regis replied in response. “What else could it be?”

Stunned into silence he thought, “Weird people, these Brazilians.”

The next morning we found our email flooded with Brazilian messages. Toyoteiros, members of Brazil’s Bandeirante clubs throughout the country, were going to have a multiple-day get-together on the idyllic island of Ilha Comprida, south of São Paulo.

They invited us to their meeting, warming us up for it by describing all the comforts of the four-star hotel they had booked. We loved to meet them, but the four-star hotel element put us off as it was way out of our budget range, so we replied we’d be happy to join them but would camp in the parking lot.

We had traveled in Brazil for only a couple of weeks and were not yet familiar with the hospitality that characterizes the Brazilians, something we would experience over and over again in the months that followed.

“No, we won’t let you camp in the parking lot. We invite you to join us and we pay. In return we’d love you to do a slideshow about your adventure,” the president responded

A couple of Toyoteiros would pick us up at a gas station. We decided to spend the night there so we would be on time. After so many years on the road this was the first time ever we spent the night at a gas station (the idea had simply never crossed our minds), and discovered it could be quite convenient as there are bathrooms with showers and a restaurant.

Early Friday morning we met five Toyoteiros who were driving in two Bandeirantes. We hit the highway but soon took a turn-off, after which an unpaved road meandered through the countryside thick with banana plantations.

It was an easygoing, fun drive with stops in between for pictures or because we had to take a ferry to reach the next island.

The last sixty kilometers were extraordinary. It was low tide when we hit the beach and we cruised right along the surf. Few things feel so liberating and exhilarating as driving on a vast, empty beach. However, we had been stopping and chatting too much throughout the day and now needed to drive the last two hours in dark.

It was quite a sensation to drive without any light around us except one beam in front of us; civilization was far away so there was no light pollution to distract, or guide, us. Where possible the three of us drove side by side to combine our spotlights.

What had been easy going during the day now became a challenge since we had to cross several streams that cut across the beach. Their depth and the force of the current were hard to determine in the dark.

“Welcome to Ilha Comprida, my friends. Fique a vondade (‘feel at home’). I’m Furlan, by the way,” the organizer of this event said as soon as we entered the hotel, giving us a hug and opening the fridge to hand us a beer.

We joined the crowd of São Paulo’s Toyoteiros: families including kids and grandparents, some twenty people all together.

“Distances are enormous in Brazil, so we expect more people to arrive in the morning,” Furlan explained.

They had already started the BBQ, the meal that always accompanies gatherings, no matter with whom and no matter where in Brazil. Furlan speaks English but he was about the only one in the group. Our Portuguese was still limited to the first words you learn in a new language so we couldn’t really talk with any of them apart from what could be exchanged in sign language.

We felt a bit lost and joined Furlan at the BBQ. It gave him the opportunity to share his passion with us: the Bandeirante.

The Origin of the Bandeirante

“Toyota found a way to build Bandeirantes with only Brazilian parts, which offered lots of opportunities. Brazil had high import taxes as well as a lack of foreign parts due to a strict, protective market economy since the country had (and still has) its own car industry.”

While turning over big slabs of meat Furlan took a sip from his beer and Coen asked him about the non-Toyota engine.

“Well, it makes sense, doesn’t it? Toyota had no problem with moving the Bandeirante production to Brazil, with the exception of its engine, because they don’t allow their engines to be built outside Japan. In the 1960s, the Mercedes-Benz engine was an obvious choice as the company had a nationwide network and built cars with low maintenance costs, a high torque and good reliability.

Some will tell you that this engine can run 600,000 miles without overhaul. But while the engine performed great, other parts were giving trouble. Due to the car’s weight, cracks appeared in the chassis and bodywork of Bandeirantes, and needles even dropped off dashboard indicators.

“You have to know that in the 1960s, Brazil went through a major pioneering phase: people moved west in large numbers to colonize new territories, the Transamazônica was built (the first Brazilian highway to connect the Amazon rainforest with the rest of the country), plus our government had decided to move the capital to the center of the country where a new city was to be built from scratch (Brasília).

The lack of gas stations at the time made the Bandeirante highly popular, thanks to its range. And there was another thing: the oil crisis was about to hit the world; it made sense to buy and drive a fuel-efficient, diesel vehicle.”

And so, while enjoying more meat and more beer, the Bandeirante’s success was revealed to us.

The Bandeirante vs. the Land Cruiser

The next morning the crowd gathered around our BJ45. The hood was opened, each nook and cranny was inspected; when possible, parts were turned over and investigated. The news went around quickly:

“This ‘Bandeirante has a Toyota engine, look at that!”

Karin-Marijke was busy showing the women the inside of the Land Cruiser, explaining how and where we cook, sleep, pee and bathe. I was busy repeating the Land Cruiser’s features: power steering, disc brakes and other elements that are lacking in the Bandeirante.

“Come on, let’s go. I have to buy a couple of things,” Furlan suggested.

Coen concluded that it’s not us but Furlan who drives the ‘Last of the Mohicans’: a model from 2001. Coen felt at ease driving it and while Furlan did his shopping, Coen inspected the car in more detail:

A visible difference is the square headlights that characterize the Brazilian Bandeirante, as well as the modern Toyota ovals on the grill. Missing, in our opinion, are the kick vents, something we really appreciate in our Land Cruiser.

While the older Bandeirantes are equipped with a Mercedes-Benz engine, the last ones feature a Daihatsu-made Toyota 14B. However, when Brazil tightened its environmental laws, the 14B engine became a problem and Toyota had to make a decision.

They investigated whether a modern would do the job, but in the end they decided to pull the plug. The last of the 100,000 Bandeirantes was produced in 2001 and is on display in the Toyota Museum in Japan.

The Bandeirante is Alive

On Sunday we went for a last drive on the beach with the Toyoteiros. A group picture was in order and in the Brazilians’ typical chaotic way of doing things we managed to line up right along the surf. As this took ages – conversations went on in between, and hoods continued to go up to check out engines – nobody noticed the high tide coming in. All of a sudden the water hit the first rear tires.

Which showed that, if they want to, Brazilians can be very fast indeed. Engines were revved up and everyone spurted to dryer grounds. With screaming engines, honking horns, enthusiastic waving and last-second photo shots we raced through the surf.

We felt it: The Bandeirante isn’t dead: it’s very much alive!

This article was first published in Toyota Trails. 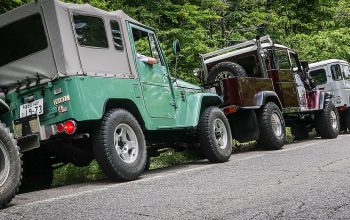 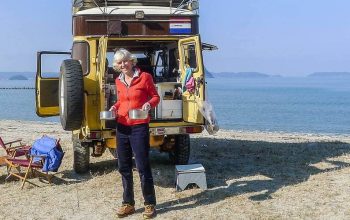