A Rainy Day in Aralsk; a Random Day in Overlanding – (Where are We – Kazakhstan 1)

“It will be raining all day.”

It took me a moment to register Coen’s words and then heard the dripping of rain. I opened my eyes and through the partly open window concluded it was still night. Why get up in the middle of the night?

However, it was 7 am. Yesterday we had entered a new time zone – Kazakhstan has 2 of them. Plus, it’s early December. Hours of daylight are few this time of year and 7 am still does feel like the middle of the night.

By the way, why is it raining and not snowing? It’s December! We’re in the heart of Kazakhstan, which has a continental climate. I want snow! Unless we really, really, have to be somewhere, we don’t drive in rain. For one, the Land Cruiser leaks. We have no clue where exactly the rain enters the Land Cruiser. Despite ten years of having smeared Sikaflex on every possible surface where rain might possibly enter, we haven’t found the culprit.

For some reason leakage is worse driving than when being parked, so we prefer staying put.

Second, when driving in the rain, there is not much to see and you never stop for what in beautiful weather might be a gorgeous view. We wouldn’t want to miss those beautiful landscapes and prefer waiting. No Road-Trip in the Rain Reason #3

With only 13 days on our visa left and all the sightseeing and wild camping I still want to do in the Mangystau Region, time, however, is running short. The regular road to this region in southwestern Kazakhstan consists of a massive loop via Aktobe and possibly even Ural, which is 1600 kilometers.

That’s ridiculous and thus we have planned to short-cut the route.

Whether that’s a doable trip or possibly a disaster, time will tell. One thing is sure, rain won’t help. So we better stay put, turn around, and sleep some more (admittedly, I never need much convincing for that).

Later this morning, after our oatmeal breakfast and our first cup of coffee, I went for a walk. I needed to go to the toilet and while there are many public toilets everywhere in the country, in cities and rural areas alike, there are none near the parking lot where we are camped.

Dressed in a bodywarmer and raincoat I jumped around big puddles with remnants of snow and deep with rainwater. Car drivers don’t care for pedestrians and drive through them full speed. I made sure to stay at a distance when they passed. The town of Aralsk is uninspiring in good weather and utterly wretched in bad weather. Once a flourishing fishing port on the Aral Sea, it lost its main, fish-processing, industry in the second half of the 20th century when the Aral Sea shrunk.

Water was diverted from the two rivers that fed the Aral Sea, the Amu-Darya and the Syr-Darya, to irrigate extensive cotton and watermelon fields that were part of a big-progress program initiated by the Soviets during the 1960s (when Kazakhstan was part of the Soviet Union). Famous are photos of rusted fishing ships in the middle of the desert. You won’t find those in Kazakhstan anymore; all this metal has been bought by China. Aralsk secured the last four ships, patched them up with a bit of paint, and they are now outside the Fishing Museum.

The Fishing Museum is situated in the old harbor. The harbor, however, contains no water. It is a pitiful sight. Around the harbor are the remains of old cranes, of ruins of warehouses with smashed-in windows.

With the shore once being 100 kilometers away from Aralsk, today it’s about 12. Lots of fish have returned the Aral Sea and the fishing industry is back in business. With the second dam in place, they hope Aralsk will one day be a fishing port again. Dressed in winter clothes, people were all carefully avoiding the puddles like I was. Some parts of the sidewalks were extremely slippery. It seemed the temperatures were right around zero degrees (Celsius); too warm for snow but too cold for the existing snow and ice to melt.

You could have an ice-skating competition in some parts. Other sections are so crooked you have to watch where you walk no matter what weather.

Check it Out: Our Winter Hoodie Selection I passed the park with leafless trees where you can take a selfie in front of I Love Aral in yellow letters. In another section of the park stands a more typical monument of Soviet times, one that honors the people who died in World War II, typical with a big statue, black stones engraved with too many names, an eternal flame (that didn’t burn) and extra plagues with names of high officers who gave their lives in the war. The restaurant on the corner has only an outdoor long-drop toilet, as does the post office, Coen told me later. No sewage for indoor toilets in a city of 35,000 inhabitants, or was it just where we went?

Aralsk has a couple of murals, one depicting the hope of a better future with the Korakal Dam and high water in the harbor. As in any town there are statues of important men, on smaller and enormous pedestals.

Cars continue rushing past, throwing up bows of ice-cold water that I successfully continued to evade. I followed the railroad, which gave the reason for this town to officially come to existence at the beginning of the 20th century (as part of the Orenburg-Tashkent Railway) even though there was a settlement long before that. The bazaar often is a happy place and here it isn’t different. Part of the bazaar is outside, with people having their shops in a container. One of them sold fish, the next vegetables and the owner Katja turned around to pose for a picture. Another part of the bazaar was inside, where shoe sellers, vendors of cookies and candies, and a number of vegetable stalls were all protected from the bitterly cold weather. Three women were vying for business and, pleaser as I am, bought tomatoes from one, bell peppers from the next, and white cabbage from the third.

And no, I didn’t need plastic bags because I brought my own. This is still an alien concept in this country.

We exchanged our age, and I was glad my Russian is still bad so I didn’t have to answer why I don’t have kids. Generally we can just point to the sky and mumble, “Inshallah.” For men that often is enough of an answer but not for women. Ala, not enough Russian in my vocabulary.

I changed the subject by offering to take a picture and we all smiled. Getting back into the Land Cruiser in this weather is a pleasure these days. For years we had no heater at all, including on the freezing altiplano of Bolivia, and in Japan’s winter we managed with a gas heater that gave lots of condensation.

However, last year, Tiger Exped was so kind as to send us a Planar heater when we started to realize that winters in Siberia are really, REALLY cold.

So today I returned to a heater Land Cruiser. Bliss. Time for a cup of coffee and a chocolate cookie. Oh, what the heck, let’s eat the whole bag and call it lunch.

Check it out: Stay warm under a duvet with a Landcruising Adventure Cover

If you’ve enjoyed our blogs, you have our patrons to thank – at least in part. Patreon helps us to stay freelancing and create more website stories for everyone to enjoy!

By the way, do you know we now have a tier system that includes unique benefits? Go check it out. 🙂 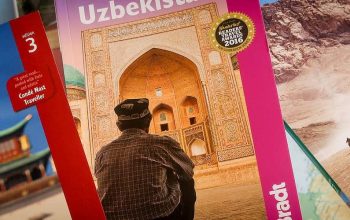