Sightseeing Seoul (Where Are We – South Korea 8)

It was hot! Where not, during summer? And since Matthew had sat on our packages for weeks, it was really time to return to Seoul and pick them up while meeting the American whom Coen had been in contact with through email for years. Oh, and a good time to tick off some items on my ‘Sightseeing Seoul’ list.

I think it’s a recurring theme: how grateful we are to people. People we meet on the street, who invite us to their homes, for a drink, for a meal, who serve as postal address, and who provide us with a valuable GPS waypoint, to name a few… First of all: Ulf and Berna, whom we met a couple of months ago and who are overlanding in South Korea as well (find their blog here). On their visit to Seoul they had found a place to camp at a construction site now in use as a parking lot for churchgoers. Since (affordable) parking is close to impossible in Seoul, we used their GPS Waypoint, which was just south of the affluent area of Gangnam.

It was perfect, 800 meters from the subway, public toilet on site, and it was cooler here than anywhere else as it was situated at the foot of green hills (with beautiful tombs). Obviously, as you can see in the photo, it was not exactly ‘Gangnam style’ 🙂 (if you don’t know what that means, check this out). 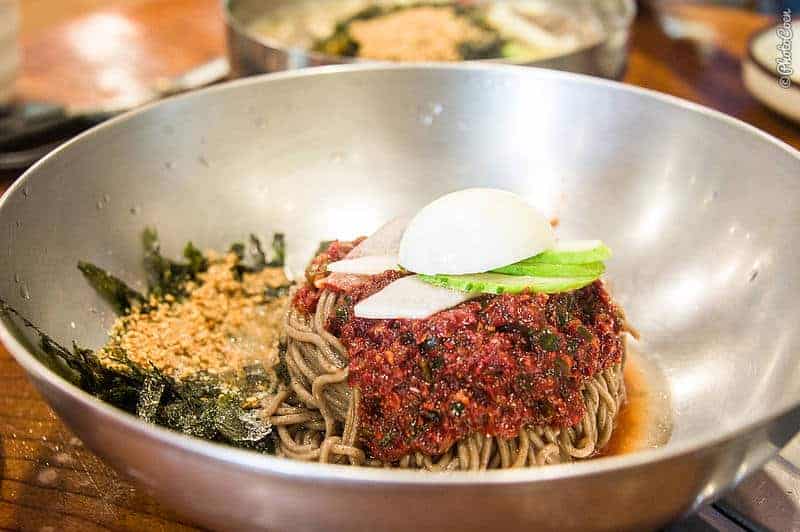 And then there was Matthew, an American who has lived in Korea for the past 15 years or so and who lives here with his Korean girlfriend Eunkyoung. Matthew has his own online business, the Turning Gate (find it here), and that’s how Coen and he found each other online, years ago.

Matthew took us to a memil (type of noodle) restaurant to check his favorite dishes, after we spent the rest of the afternoon chatting in one of Seoul’s zillion coffee bars but this one, Matthew insisted, having the best coffee. And, on our last evening in Seoul, the four of us had a great evening at a bar where they produce their own makeolli, which is a type of rice wine. We’re far from experts but it was delicious and we had a blast. Olympic Games – Far away but, in spirit, close by

We saw few of them. As it turned out, a heatwave had struck particularly this part of the country and it was simply too hot to be outdoors. But the park seemed nice enough to, one day, return and do a proper tour of the sculptures. Very impressive was the Peace Gate, as the official entrance is called. The day before we had tried other outdoor sites, among which a temple with an entrance full of flowering lotuses, and a couple of royal tombs in Gangnam that are a UNESCO site.

Beautiful sites, but after the Olympic Park we could draw only one conclusion: air-conditioned museums are the places to be in this heat.

Fortunately, I still had some on my list. In April we had already visited Korea’s National Museum, which is a modern, sprawling and beautiful complex. We had spent hours just studying everything on the first floor.

As the first floor was all about Korean history, studying it helped us a lot to put historic and religious sites that we visited throughout the country in context. But there were two more floors, so we took a day to check those out, about Asian art and Korean calligraphy. The most interesting section was a surprise: a special exhibition on Afghan art in cooperation with Afghanistan’s National Museum and National Geographic. In the 1970s a Russian archeologist came across a major burial site with lots of gold that shed a whole new light on Afghanistan’s history.

The treasure has been compared, in importance, with the one of Tutankhamen in Egypt. But with Afghanistan getting caught in turmoil and war, the treasures got lost, or so many people thought. What had happened with them? The poor Russian archeologist was an easy target, of course.

Read More: Being Spoiled at the Romance Factory

When in 2004 things appeared to return to normal, a lot of people wanted to open National Museum’s treasure vaults. This was impossible. According to tradition these had been locked with 7 locks, and the keys were kept by 7 different key keepers. All of them needed to be present to be able to open the vaults. But because of the violent situation of all those years, these people had disappeared.

A law needed to be, and was, passed to open the vaults without these key keepers. Big tension, of course, and, lo and behold, all treasures were still there! I think the Russian archeologist, and many others, must have wept from relief.

This treasure and many other archeological finds have been going around the world since 2008, and I think it’s better to keep them moving for another while to keep them safe. No photos allowed though.

The second museum, which also warranted a day of our time, is the Korean War Memorial. I’m not so much a fan of war museums, and I patiently waited – in the shade – for Coen to admire all the tanks and airplanes that were displayed outside. The one I did appreciate was a tiny airplane, once used by a North Korean to defect to South Korea!

The museum is full of stories, photos, timelines and what have you about the war and a whole floor dedicated to all UN-participating nations, one of them being the Netherlands (others were US, Colombia, Australia, France, Ethiopia, South Africa, Turkey, Greece, Thailand, and others; total 16 nations).

The most intriguing facts were that not only the war officially never ended – in 1953 an armistice was signed – but also that South Korea didn’t even sign that armistice. They were against it and wanted to continue fighting until the entire peninsula would be united again as one Korea. Meanwhile the heat increased, it became harder to sleep at night despite our faithful Hella ventilators doing their job (apart from ventilators we also have their lamps. And then it just happened, as it often does for me after a week of being in a big city: I needed to leave. Today! Okay, tomorrow.

And so that’s what we did. We swapped the heat, the smog, the asphalt and concrete for clean air, still heat but not as much, beaches, forests, temples and caves. Bliss.

Would you like to know where we are going next?

In our newsletter you can find out. You’ll also stay up to date on Coen’s latest designs as well as on what other adventurers are up to.