Shipping the Land Cruiser from Suriname to South Korea – Part 2

Here is an overview of: 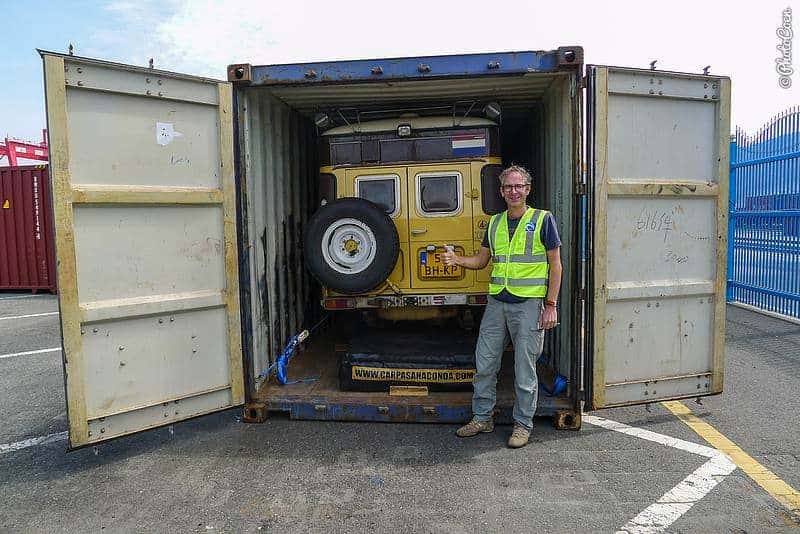 We arrived in Seoul on Thursday, March 24, 2016, and our container would arrive on Saturday, April 2, in Busan. This would give us enough time to prepare the necessary paperwork, although we started only on Monday, March 28.

1. We called CMA CGM in Seoul to ask about the procedure. Few people spoke English. On Tuesday, March 29, we went to the office to hand over the Bill of Lading.

2. We received CMA-CGM’s invoice (of their local charges) on Friday April 1 by email (which is given the day prior to, or on the day the vessel arrives). Normally you’d pay electronically by wire transfer. We suggested going to the bank and deposit cash into their account, as we have no local bank account. But our Korean friend Jin offered to pay electronically and we paid him back. This was 189,000 Won (about US $160).

Read More: How to Ship a Car 3. CMA CGM insisted we needed a broker, which confronted us with 2 challenges.

Few people speak English and when calling offices, it would happen people hang up simply because they couldn’t respond to us in English. Fortunately we were staying with a Korean friend, Jin, who helped us a lot by calling people and being a translator.

Does this mean you can’t do the procedure without a translator? No, you can organize it, however, having the help of a Korean who speaks English is helpful.

Challenge 2: being the first with a car arriving in a container.

When reading stories about overlanders going to Korea with their vehicle, it was clear that bringing your car was easy. Everybody got their documents organized in a day (or maybe two). But I had not realized that these people had all arrived by ferry/Ro-Ro (most from Japan and Russia). Nobody, we now learned, had shipped to South Korea using a container.

There was no clear procedure and we were talked into following the procedure for regular cargo. This meant having to have our container trucked from BNCT (Busan New Container Terminal, west of Busan) to the Customs Department (downtown Busan, where all ferries arrive).

CMA-CGM and the customs office in Busan (more about them later) insisted we’d need a broker to get that part organized.

We called around, Jin often helping us. It led to the following situations:

We had now been making calls for a week and had gotten nowhere. It was time to take matters into our own hands. Discussing with Wendy and Jin, we concluded it was best that we would take the train to Busan and go to the customs department in person, and hopefully get some sympathy there.

Jin offered to join us, as a translator, but in our experience it can be helpful to be the two foreigners with all good intentions but not speaking the language. It may help ‘motivate’ people to simply solve the issue so everybody can move on.

Important: note that if you want to do the customs clearing yourself—like we do—make sure you give your own name as the Consignee when preparing the Bill of Lading (so at the very beginning of the shipping procedure, when getting the car shipped), with you passport number added to it

5. Buying car insurance. Wendy Choi offered us 350 US dollar for 3 months. To us this is a lot of money. Jin, again, helped us, and via a friend we got a 6-month insurance for 400 dollars. Jin paid electronically and we paid him back.

2. Clearing the container in Busan

The car had arrived on April 2, a Saturday, so nothing could be done then. We took the train from Seoul to Busan on Sunday.

6. On Monday, April 4 we went to the Vehicle Clearance Office of the Customs Department, which is situated below the Ferry Terminal. In our two words of Korean we greeted the three officials that set in a pleasantly empty and quiet office, two of them watching a golf game on TV. We didn’t understand exactly what they said, but one asked us something with the word “Nederland” in it, and so we knew they had received the news about our container.

One explained, using pen and paper to draw images that:

You don’t need to speak a lot of words to make it clear this was too much money. He totally understood. Coen, also good at drawing, explained that we wanted one of them to come with us to BNCT to inspect the container and car on the spot. This he understood and started discussing with his co-workers.

We were motioned to sit down on the sofa and were offered a cup of water. God knows what all went on between them and I was grateful to have brought my e-book, expecting to sit here all day. Not so.

And, just as suddenly, it was time to go, two of them motioned.

Where to? we asked.

To the BNCT (20-minute drive via highway).

But first there were a few steps to be made:

We were not allowed to enter the terminal, the officers only learned there. We needed a pass from the BPA, the Busan Port Authorities. Brilliant. Also we needed to pay a fee – terminal handling charges: 84,000 won (about 70 US dollar), which we paid cash on the spot (officially you can’t do this but one of the employees, Yoeng, paid it electronically and we paid her back).

But, the officers could enter the terminal and asked for our keys. Had we had a normal car, easy to drive out, the officer would have driven out the car for us and that had been that. However, as you may know, that isn’t that simple with our Land Cruiser (tires need to be deflated, it takes a lot of maneuvering as there is barely a millimeter of space between the roof-rack and door, among other things).

The customs officers took the key of the lock we had put on the container, opened it without us being present, and took a photo. This being South Korea we were okay with that. From their part they were very lenient as we did not want to give them the car keys to check inside (problem with locks, among other things) and they agreed with that, accepting our word on everything being personal belongings and that we had nothing to declare.

8. Back downtown in search of BPA. Problem: our customs officers now learned that there are 2 BPAs nowadays, and nobody knew this until we had been sent from the Ferries Terminal to a building downtown who told us the BPA for BNCT is in a new building, in fact, a mere four kms away from BNCT! There was no time left for that today.

We got rid of the trucking issue, and the customs department felt for us and didn’t charge us the $310. Obviously we sincerely thanked the officers for being so kind and helpful. Had we known about the port passes, we would have had our car out the same day!

9. Tuesday, April 5. On our own we returned to Busan New Port, where we first went to the BPA (Busan Port Authorities) where we quickly got a stamp that authorized us to enter the port.

We walked/hitchhiked to the BNCT where our contact person from yesterday, Yoeng, who speaks English fluently, gave us the safety jackets and went with us into the terminal. The container stood ready, two guys organized a ramp, and thus forklift. The opening of the container and retrieving the car was a piece of cake. The BNCT people helpful where needed. We could use the forklift to get the tent back onto the roof rack, we took some pictures, and drove the car outside with Yoeng guiding us where to go. She then invited us to lunch before we got back to the parking lot.

Here we had the time and place to bolt all other stuff back onto the roof. As we were working on that we got visitors, a whole group of BNCT employees who returned from lunch, including the CEO John Elliot, and Peter Slootweg, the commercial director who happens to be Dutch! Somehow this felt like a fitting end to the whole shipping business.

On the Surinamese side: US $1,182 for the shipping

Summary of the procedure on the receiving end