A Sampula Party with Kali’na Amerindians in French Guiana

Everything is ready: the benches have been put in a circle along the sides of the open communal carbet (jungle hut) in the center of the village. Insulated containers have been filled with beer cans and ice cubes, and on the tables are plates with peanuts, potato chips and cake. The 200 liters of kasiri (locally brewed cassava beer) are kept in white plastic, waterproof barrels with red lids that generally are used for, among other things, keeping stuff dry when canoeing.

About ten men enter the carbet with large, partly painted drums. Each drum has a long rope that is attached to a beam running across the carbet. Within minutes ten drums are lined up along the width of the carbet, with the drummers sitting behind them on wooden benches. The music group is completed with a flutist, a man who shakes two calabashes filled with seeds, and two female singers.

An 8-Year Research on Leatherback Turtles As far as we are concerned, the party can start. The local Kali’na inhabitants, however, remain seated on their benches and appear to be waiting. For what?

“A traditional sampula party needs to be officially opened with a speech by the organizer,” a drummer whispers in Jean-Yves’ ear. The drummer has become one of Jean-Yves’ close friends in the village and has helped him on numerous occasions explaining the nuances of the Kali’na culture. Jean-Yves feels he’s been put on the spot. A speech? Right.

His feeling of uncertainty can’t be heard in his voice as he thanks his friends and the community. This is his night, his conclusion of his eight-year research program on leatherback turtles. During our weeks at Awala-Yalimapo, where we simply didn’t tire of watching sea turtles coming ashore to lay eggs, we met the research team and one night joined them to see their work (read about it here).

The field research of La Mirette, a project of CNRS (France’s National Research team) entailed an annual five-month stay at Awala-Yalimapo for eight years in a row. Together with six or seven employees, or interns, Jean-Yves strolled the beach every single night in order to do his research on leatherbacks. Each team member walked about twelve kilometers per night through the shifting sand, in all weathers, from long nights during which it rained cats and dogs to windless nights with tormenting mosquitoes. Large quantities of data about the weight, measurements, eggs and blood of the leatherbacks and plasma samples are waiting to be tested and analyzed.

But this party means more. It is a profound thank you to the Kali’na Amerindians, who have made Jean-Yves part of their community. He has made friends here and learned the basics of their language. In preparation for the party he worked for two days with two locals to produce all those liters of kasiri, which is a physically demanding job.

The Production of Kasiri – Cassava Beer

Later Jean-Yves tells us that it had amazed him how every single bit of the cassava was used, nothing was wasted. “Digging up manioc roots is backbreaking work and sometimes a root would break off. Initially I didn’t bother with it, but when one of the men noticed this he remarked, ‘Hey, you missed a bit, you’d better dig it up,’ even if only a centimeter was missing, and I would return and dig deeper. Later we had to grate all those roots. As I held the last part of a root up in the air – worried about grating my fingers. I asked, “What do I do with this?” “Well, grate it, of course, was the answer they gave me. Right. It was trying but fun – my fingers are still intact.”

“Well, grate it, of course, was the answer they gave me. Right. It was trying but fun – my fingers are still intact.”

“Well, grate it, of course, was the answer they gave me. Right. It was trying but fun – my fingers are still intact.”

After his speech he hands the microphone to Daniel, the captain of the village – because the captain is also required to give a speech on such occasion.

I am sitting next to Kennet, a Surinamese who has lived here for many years. During Binnenlandse Oorlog (War of the Interior) in the 1980s, many Kali’nas, or Carribs as they also call themselves, fled to their fellow tribesmen in French Guiana. Thus it is not so odd to encounter many locals here who speak Dutch. While Daniel delivers his speech in the local language, Kennet translates for me. “For 35 years white men have been doing research on our beaches. For the first time a white man organizes a Kali’na party,” Daniel says.

Whether a white man could organize such a traditional party was not a matter of course, I am told later. Weeks ago Jean-Yves had proposed the issue, giving the villagers time to mull it over, and talked to all who felt they had a say in the matter. The fact that he got permission, and even more, that the party is held in the communal carbet, does probably say something about his acceptance in the community. The words have been spoken, let the party begin. Soon the throbbing of the drums fills the air with a solid pulse that will last throughout the evening.

“Come, let’s dance,” Kennet says. We walk up to the six people who have already started dancing and who have given me a glimpse of how it works. We now form a row of eight in front of the drums, hand in hand. To the rhythm of the drums we move our feet, staying in the same spot, bend our knees a little and bend about sixty degrees forward. Our arms rhythmically move up and down again.

However, not everybody has the same feel for rhythm, which makes it hard to keep up with the group at times. The drummers and the two female singers perform traditional songs with recurring phrases. Every once in a while we can stretch our backs and swing our arms high up in the air. It’s only a moment though, and back we go, knees bent and our bodies bent forward. It is a pleasant rhythm, steady and somehow soothing. A strong back is required though. I can imagine that after a number of kasiris you go into some sort of trance and can continue like this all night long.

Everybody can join the row of dancers. If there is no more space, a new row starts behind the first one. But it seems not done to leave the row before the music stops – I see nobody do that, anyway. Only after the music stops, people stop and applaud. Drinks are served. It is not done in this culture to get up to get your own drink. The CNRS team members function as waiters.

“One more dance,” the drummer announces. “After that, we eat!”

And so the evening continues. The traditional drum music alternates with contemporary music, operated by an Apple computer and blasting through mega sound boxes. But nobody dances.

“They will, later on in the evening,” another Surinamese explains. “When the drummers decide to quit for the evening they will also dance and drink.”

For more on French Guiana, check out these articles: 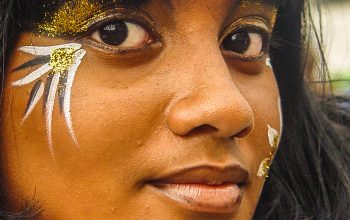 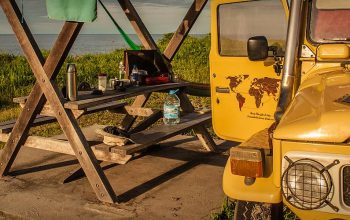