Off-roading and Rough Camping at the Páramo of Zuleta (Ecuador)

“I better put it in low gear,” Coen concluded.

Engaging the lockers was hard and to get the Land Cruiser in 4WD took a bit of an effort as well. How long had it been since we used that shift stick?

At least six months. I think the last time was when negotiating the muddy mountains around Cajamarca, in Peru.

Ahead of us the trail had deeply eroded. I got down from the car and walked uphill to check whether this was the end of a trail, or that we maybe we had missed a turn-off.

We hadn’t and with determination Coen conquered the treacherous point that put the Land Cruiser on a steep slant. It felt good to be off-roading again and to challenge ourselves and the Land Cruiser for a change.

We were invited on a cruise to the Galápagos Islands. Last month we were guests of Casa Gangotena, a top-end boutique hotel in Quito and the fabulous Mashpi Eco Lodge in Ecuador’s cloud forest, while this past week we spent a wonderful couple of days at Hacienda Zuleta.

Hacienda Zuleta, in the Andes

The hacienda lies on a two-hour drive from Quito, at an altitude of 2800 meters in the middle of the Andes and is surrounded by volcanoes and lakes. Here, nature and agricultural communities share an extraordinary region. In fact, the páramo we were about to explore is part of the Zuleta Hacienda and community.

Feeling at Home at Hacienda Zuleta

Hacienda Zuleta is one of Ecuador’s oldest farmsteads characterized by thick (1.30-meter-wide) adobe walls, built in the 17th century by the Jesuits. In the 18th century it was returned to the Spanish crown and several families owned it until the Lasso family bought it in 1898.

It was home to one of Ecuador’s presidents. How often do you get to stay in a house of an ex-president? Galo Plaza Lasso (president 1948-1952) was a remarkable, progressive man who, among many other things, initiated Ecuador’s land reform by giving plots of land to workers on his own hacienda halfway the 20th century.

Today this is one of Ecuador’s top-end haciendas with luxurious bedrooms and living rooms with fireplaces; lazy couches; a huge library; walls covered with family photos; and a cheese plate (from its own cheese factory) with a glass of wine every night at six – how can you resist that?

During one dinner Fernando said, “When I see guests entering the living room without shoes, I have succeeded. I want people to feel at home.” That pretty much summarizes the style of the place.

We went horseback riding (read here), saw the seven condors that are part of the hacienda’s Andean Condor rehabilitation program, and two wild condors soaring above the valley. I loved hiking here.

The hacienda is home to the largest collection of Caranqui mounds, a pre-Inca civilization, and the women of Zuleta are known for their exquisite embroidery – a true cultural heritage. And then I don’t even mention the organic garden and cheese factory. All in all, a lot to do, see, and experience.

From Slash & Burn to Protecting the Páramo

And now we were about to visit one more part of the hacienda: the páramo. We had left the pastures behind, opened two gates that keep the cows below and the alpacas up the mountain, and found an increasingly eroded path.

This páramo, in fact, is another incredible story that characterizes this hacienda and community. For centuries cows grazed the high mountain tops but about twenty years ago it was decided that part of some 4,000 hectares should be given back to nature.

The cows were brought down and the Zuleta community now has some 80 alpacas grazing here. Because of the alpacas’ weight but especially the form of their hoof, the vegetation is no longer destroyed as happened when cows grazed here. No more cows means no more devastating slash and burn practices either.

A Puma with a GPS Collar?

Initially, the project was met with some resistance; age-old habits aren’t changed that quickly. But the local people got to appreciate the páramo, which recovered remarkably fast despite so many years of onslaught. Even when a puma attacked numerous alpacas (costing the villagers $500 a piece!) they didn’t kill the puma as the hacienda owners had expected.

During one dinner at the hacienda Ximena Pasnmiñol joined us. She is project director of the above-mentioned Galo Plaza Lasso Foundation. “A villager came up to me, asking if we could catch the puma and collar it with a GPS device. In that way they would know where the puma was and they would be able to move the alpacas to elsewhere.

“I found that such a remarkable solution,” Ximena said. “We didn’t do that but we did construct a double-fenced area with electrics on the outside where alpacas now safely spend the night.”

Rough Camping at the Páramo

We passed the cage on our way up, as we did the alpacas and their shepherd. We chatted for a bit and moved on. The páramo is an ecosystem that grows at an altitude between forests and perpetual snow. In the Andes Mountains, the páramo is found from the Mérida mountain range in Venezuela, across the Colombian and Ecuadorian range, and going all the way to the Huancabamba depression in Peru.

The páramo is home to thousands of birds and mammals – it was too bad we didn’t see a puma or bespectacled bear. The area is an important water source for the community and hacienda and although we covered a quite dry area of the páramo, I remember from the Cajas National Park near Cuenca how páramo indeed can be characterized by lakes, peat bogs and swamps.

We parked the Land Cruiser and went for a hike. The wind had free play and was incredibly fierce. That combined with walking at 3,800 meters made that we were easily short of breath.

We stuck to the paths as hiking through the tall marram-like grass is close to impossible without spraining an ankle. From the top we had views of the snow-capped Cayambe Volcano and looked out over de Zuleta community below us and lakes in the distance.

What is True Luxury?

Let there be no misunderstanding: we appreciate the luxury of a comfortable bed. We love staying at people’s homes and as guests in hotels that otherwise we would never be able to afford. However, rough camping in a place like this surpasses staying at a five-star hotel.

At our core this is who we are and this is what we love about our lives. To be free, to camp in the wilderness. To breathe this pure air, take in endless views, to hike without being chased by barking dogs, to enjoy each other’s company without interruptions. All contribute to an incredible sense of freedom.

We live the lives we want to, to the fullest. Here that means hiking when the weather is beautiful and the sun comes out and returning to the car for a cup of coffee or tea when the first drops of raining start to hit us, only to go for a second hike when sun rays warm up the Land Cruiser and ourselves once more

By the end of the afternoon the sunlight was soft yet intense. Extraordinary. The colors of the grass changed constantly. One tussock of grass could change from green, yellow, grey, silver, to gold within minutes and among the grass grew a multitude of other plants and flowers.

Coen went for a steep hike down to a hut and lost the lens cap of his camera. The next morning we gave it a try and hiked down once more in the hope to find this little piece of plastic amidst knee-high grass (we didn’t succeed). Coen walked ahead of me and the slope was so steep that I lost sight of him.

Suddenly a condor took flight right in front of me. Magic! The sounds of my world were dominated by the howling wind and my eyes were locked on this condor soaring above us, circling back and forth, riding the thermals.

We are so privileged!

Fernando, thank you for your invitation and friendship. We hope to see you soon.

Check out: The Tire-in-a-Mile T-shirt Collection 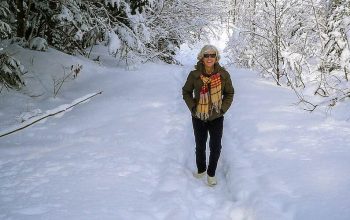