What was wrong with him?!

I turned around. A skinny, shaking man with a small beard had swiftly cornered Coen against a wall between our Land Cruiser and a grey Volkswagen Gol, holding a large kitchen knife at his chest. I stopped dead in my tracks.

Where did this guy appear from? Did he fall from the sky? What did he want?

I watched with bated breath what would happen. I carefully studied Coen’s face, the movements of the knife. From the corner of my eye I noticed how the two fully armed guards of the nearby museum watched the scene as if they were watching a movie. They made no attempt to help.

Please don’t play the proud guy now, just hand over your bag, I begged in silence, wondering what was taking him so long.

I felt no fear. I didn’t panic. There was only the rational part of my brain thinking how to get out of this scene unscathed. Handing over that bag obviously would do the job.

However, Coen is a proud man and I didn’t know what he would do. I had never seen him let another man dictate him what to do. And that did make me nervous.

One night in Laos, when confronted with two drunken policemen at our bush camp, Coen had refused to part with our passports, which had fueled their rage. Instead he had demanded to see theirs. Instead of arresting us the policemen had been taken aback by Coen’s retort and they agreed to hand over theirs. With their IDs safely in his hands, Coen had ensured that our passports would be given back, and only then handed in ours.

At border crossings, or even military checkpoints with soldiers, guns at the ready, we are often asked what we carry in the green military box on top of the Land Cruiser. Coen consistently states, “Explosives” with a smile, which has never led to trouble but to shared laughter – no matter how unlikely this may seem in countries such as Iran and Pakistan. Coen doesn’t allow himself to be intimidated by others and, most of the time, gets away with it by taking the sting out of the situation with humor.

This mugger didn’t have a sense of humor, though. He wouldn’t accept orders either. Suddenly Coen was no longer in control – something he was utterly unused to, as was I. What would he do?!

“What do you want from me! Hey, take it easy!” Coen cried out. He wove his hands in front of him, palms open, to show they were empty. I read his face and realized he believed he had nothing to give.

“Coen, he wants your bag,” I quietly instructed him in Portuguese. Coen’s eyes scanned down his body – right, there was a bag hanging over his shoulder! He handed it over, and with it his 1000-dollar camera.

The guy wanted money. Coen didn’t carry any on him. The guy moved to me, seeing the irregularity in the pocket of my pants that betrayed a wallet. Now it was me who had to take the right decision. There was no more than a second to react, the mugger swiftly moved forward, brandishing his knife.

Can’t outrun him, can’t hide. The knife is too big. Breathe. Don’t move, stand quietly so you won’t scare him and give him the wallet,‘ I told myself and acted accordingly. The robber ran off, leaving us unharmed.

Half an hour later Coen had convinced the museum management to call the police. We sat down on a bench and waited. In the minutes of quietude that followed I reflected on the various tricky situations I had been in, where the fast assessment of a precarious situation and the subsequent decision – often made in a split second – decided the (positive) outcome of that situation. I suppose we have all been there.

Having overcome yet another one of these situations strengthened my self-confidence. Difficulties may arise when and where we don’t expect them, but that’s okay. I had once more proved to myself that I could deal with them.

I was shaken awake from my thoughts. The guard, who had stood near the robbery without acting, now had nothing better to do than to nag me about parking our Land Cruiser elsewhere. My fury about the incident was suddenly projected onto him, and I told him to get lost.

Flashing lights announced the arrival of a police car, which was followed by the journalists we had called. We had a story to tell.

Due to an event the Solar do Unhão Museum (Museum of Modern Art) didn’t allow us to park in the parking lot. The guards instructed us to park in the street uphill instead. This didn’t feel right at all (this road leads right to a favela) but for reasons irrelevant to this blog post we ignored that gut feeling and parked anyway (more on trusting your gut in this blog post).

When we talked to the museum management after the robbery, they told us that robberies have occurred here frequently. They even had a folder with copies of the different charges people had filed with the police. Just so you know. 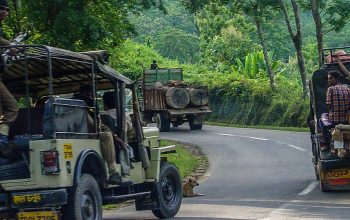 1 thought on “Robbed in Brazil”