Our last travel story ended in Chavin (read about it here), which we were about to leave. It was time to explore the fabulous Cordillera Blanca, known for its large number of 6,000-meter peaks and mind-blowing landscapes. By now we were aware that we had arrived in the wrong time of the year: the rainy season, and had already given up on the idea of doing a mulitple-day trek. We now just hoped to get some stunning views and extraordinary places to camp where we could hopefully do some day hikes.

But first we drove to Huaraz where we had to wait a day because the glow plugs had blown (for two days we parked on a descending road so we could jump-start the Land Cruiser in the morning). New ones needed to be sent from Lima. We spent our day wandering a bit through the pleasant town and discovered chocho, a type of grain that is served with onions and tomatoes, or with cilantro and peppers. I loved the first version and figured I could cook it myself. Well, cooking chocho is easy enough but then it is still so bitter, it’s inedible. For four to eight days, women keep the cooked chocho in buckets of water, rinsing it regularly. All that work and asking only fifty centavos or a sole for such a tasty, nutritious plate.

With an engine that would start in cold weather and on altitude again, we were back on the road. Luck was not with us. We saw very few mountaintops, let alone white ones. The world around us was mostly grey and sulky. A winding, asphalted road took us to Chacas, which was one of the loveliest villages we’ve seen in Peru.

Whereas the region of Huaraz has been devastated throughout history by earthquakes, this particular region has thus far not met that fate. As a result, impressive white-plastered buildings with wooden balconies dating from the colonial era are still standing. Asphalt turned into a dirt road, which may not also be comfortable to drive, but somehow does enhance the surroundings. We found a place to prepare lunch along a river. It was such a lovely spot with a couple of small farms around us, sheep and donkeys passing by, and in the distant a glacier, we decided to camp here. We stayed four days, basically waiting for good weather as we didn’t want to cross the Cordilleras in the rain, but then gave up. We did see snow, but that was because we were hit by a snowstorm, making driving treacherous. Oh well, this gives us all the more a reason to return to Peru one day, to do justice to the Cordillera Blanca! Other travelers had advised us to check out one particular mountain lodge, just east of Carhuaz so we camped there for a night. Finally had a bit of nice weather, and after a good early morning run around the lake we continued our journey.

We drove with smiles on our faces. We passed agricultural fields where farmers were all harvesting. It’s such a fantastic sight, all this food, all these people still toiling the soil using their hands. So basic, so natural, so – how should I say it – right. There’s still a lot of communal work in Peru – although due to the money system that has also infiltrated the hinterlands and as a result people caring more about their own welfare than that of the community, it is disappearing. Here it is still part of life. A woman was washing baby spinach in a stream, and I bought some, and farther down, I bought big bunches of camille and anise. We had lots of tea to drink from it. I tell you, this is among the privileges of traveling with your own vehicle; to be able to stop wherever and whenever you want. It is also one of the richest moments of my life: buying food like this, fresh from the soil, chatting with the farmer who planted the seed and harvested it himself/herself.

Being romantic here and unrealistic considering the size of the world population and the amounts of food needed to feed it? Well, call me an idealist, but I do think the modern world simply has it wrong with the way agriculture has turned. One day, Colette – Emily & Adam’s 1.5-year-old daughter – (read about their journey here) responded to Emily’s question how healthy food made here feel. Colette gave it a bit of thought and then responded, “It makes me feel happy.” Here’s a kid regularly asking for an avocado or a plate of beans! It is just such a pleasure to see that.

Her words stuck. I now often reflect on how a meal makes me feel. The chicken and rice in the road restaurant don’t make me feel happy; a tea made of freshly harvest camille, or a spinach salad does, odd as that may sound. Give it a try, and see how your meal/drink makes you feel. It’s an eye-opener, I tell you. Anyway, after getting side-tracked here on food, let’s go back to the road. We left Caraz too late and as a result had to rush through the Cañon del Pato a bit, which was unfortunate because it’s a stunning stretch do drive. Due to the weather and thus rocks tumbling down all the time, we didn’t want to camp in this vertically-walled canyon.

Peru’s Historical Past: the Ruins of Chan Chan and Huaca de la Luna

We wanted to visit Trujillo to visit a couple of historical sites. They turned about among the nicest we’ve seen in Peru. Whereas the Cusco region dominates in Incan sites, north Peru has a much wider variety of ruins which belong to different pre-Inca civilizations. I assume Peru must have the same problem as Greece and Italy: having so much historical wealth. What do you keep, what do you restore? There’s too much to keep it all, there’s simply not enough money for it. Boy, am I happy not being the one having to make those kind of decisions! 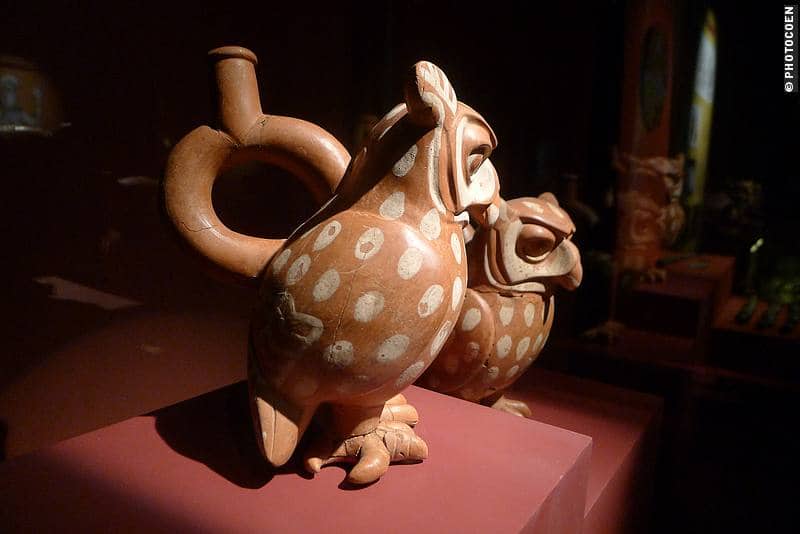 Temple de la Luna belongs to the Moche Period, roughly 200-800 AD. The Moches made by far and largest the most incredible ceramics we’ve seen anywhere on this continent. We’ve seen their work in numerous museums but it never tires (in most museums you can’t take pictures, but fortunately we could at Sipán’s museum). The drawings are intricate, the designs of the vases, drinking cups sometimes sculptured into animal-looking figures.

The temple itself is quite a masterpiece and stands out because the heavily decorated walls still contain their original paints. Chan Chan is a UNESCO World Heritage Site and in its time was South America largest city (all built from adobe): 28 square kilometers with some 100,000 inhabitants (numbers do differ quite a bit depending on the source). Chan Chan was the capital of the Chimu people, who lived around 1300 AD, and who were conquered by the Incas. Most of the city has eroded, but a temple complex has been saved and restored: the Tschudi Complex. It was a pleasure to walk around, especially admiring friezes and decorations.

Time for some Beach and Good Weather

Trujillo, like most Peruvian cities, is clogged with traffic and uninspiring. So we drove a bit north and found a place to camp on the beach of Huanchaco. We intended to stay a night or two, to visit the above-mentioned ruins, but ended up staying more than three weeks. What a nice place to hang around. We just loved the ambience, the quietude yet liveliness at the end of the afternoon around the pier. It also helped that after all that grey and groggy weather the past numerous weeks we actually saw the sun for most of those days. What a simple yet intense joy!

It was a great place for running in the morning. The first couple of times we ran north, on a dirt road that runs along ponds where locals grow the torora reed to make their fishing boats, a long-standing tradition of the Chimu people. Later we ran along the beach downtown and farther south, admiring the fishing men at sea on their boats as well as loads of surfers, as this is a surfing heaven in Peru. We finally got into drinking the famous Peruvian pisco sour cocktails and met a number of nice people: Berry of Otra Cosa Guesthouse, Paul & Renee – two Dutch running Amelia Guesthouse, and we are eternally grateful for Julie’s companionship and friendship, letting us use the bathroom and WIFI at her Hostal La Gringa. Berry and Julie also let me use their blender for new batches of peanut butter and hummus, but I’ll tell you more about that in another post. We had planned to do a loop east of Cajamarca. Fortunately, Bart & Renate hit Huanchaco on their motorbikes. We met, chatted for hours about their journey from Alaska down to Ushuaia, and learned that the bridge east of Cajamarca had just been swept away by bad weather. Repairs would take weeks. As this stretch apparently is a highlight for overlanders, we do have to return one day and check it out. For now there was no other option than to drive to Chiclayo, which was good for another set of impressive ruins (Sipan and Tucume; both worth a visit).

We meandered north from the coast into the mountains and on into the tropical jungle. Not far north of Jaen is the Peruvian border, behind which lies for us a new country with hopefully lots of inspiring adventures: Ecuador.

For more on Peru, check out these articles: