To us overlanding has become synonymous to long-term trips with your own vehicle to various countries, if not continents. Overlanding in Venezuela (but also e.g. in the States) encompasses more: overlanding includes going to the countryside with your vehicle and camping gear for a weekend trip. It is something that many Venezuelans love doing.

Coen met Rodolfo via Luis of the Lost World Expedition. We were invited to stay at Rodolfo’s home in Puerto Ordaz, where we also met his wife Alexandra and their 2-year-old Carlotta.

Our hosts are overlanding aficionados and in between our car repairs (no, the work never stops) and other chores we shared many on-the-road stories. Luck was with us as they were about to go on a long weekend trip and we were welcome to join them.

Check it out: Our Classic Landcruising Adventure T-shirt

We took a plane to Caracas, where Rodolfo keeps his overland vehicle, a series 80 Land Cruiser, or Autana in Venezuela, spent the night at a pousada and set our alarm clocks for 4 am.

In pitch dark we left Venezuela’s sprawling capital now seemingly void of people. Streetlights and a GPS lead the way through affluent areas characterized by fenced-in houses and a lot of trees (I was surprised to see how green some of Caracas’ areas are), as well as hillsides covered in shacks.

While there are laws in Venezuela, many of them are not enforced. Speed limits, wearing seat belts, and strapping your child in a car seat are among them. With our European eyes we have been quite anxious – to put it mildly – to see Carlotte moving around or sitting in her parents’ lap in the passenger or even driver’s seat without a seat belt when driving.

But here we did appreciate being able to speed on roads where we weren’t restricted to sticking to 80 or 120 kms/hour like we would have in the Netherlands. Laws…don’t we all like to bend them the way in our own favor?

One particular element boggled our minds though: overlanders have been talking about the numerous and corrupt checkpoints between Caracas and the border of Colombia, however, we hardly came across any and were stopped only once.

Overlanding the Venezuelan Still – Bring in the Aircon

Overlanding in Venezuela often means going to the beach, or pristine, natural surroundings such as the Gran Sabana, bringing lots of booze and partying until the early hours with music at full blast. This is where Venezuela’s famous air-conditioned roof-top tents come in play, which we have seen only in this country.

Generally the aircons are not used at night, people explained us this weekend. For an average Venezuelan the nights in the countryside are cold enough.

But for party-goers who roll into bed at 6 am the heat is an issue and hence the solution of air-conditioned tents, which is affordable – no matter how ridiculous for environmental reasons – in a country where fuel costs nothing.

Check it out: The Landcruising Adventure iPad Collection

Rodolfo and Alexandra are among the Venezuelans who are not part of such groups, which generally are also notorious contributors to throwing trash out of the windows will driving and anywhere around them, not bothering to collect, let alone taking it with them when going home. Just like Rodolfo there are many other overlanders – and people in general – who are greatly annoyed by this behavior.

Destinos Inteligentes is a new group of overlanders, founded by Juan Rodriguez. One of the things members of this group do is taking photos of destructive behavior (including people destroying nature e.g. by not sticking to the trails) and exposing them on Instagram.

As some of these Instagram pages have large followings (e.g. Rodolfo’s, find it here), this appears to have an effect on the behavior of people.

Destinos Inteligentes was created with the idea of sharing overland trips with people who have the same mindset. People who like to share time and places, as well as educate others and thus creating a snow-ball effect of behavior that is respectful to other people as well as nature.

One of the things that struck me this weekend – although not for the first time in this country – is the pride Venezuelans take in their country. At the end of the weekend we got together in a circle, sharing feelings and experiences with regard to this weekend, overlanding, and their role in Venezuela.

The intensity and emotion with which these people shared the love for their country, the hope and belief they have in Venezuela to grow out of this crisis, the willingness to contribute to this growth and share their knowledge with others deeply touched me.

They don’t deny the country’s problems, on the contrary, but continuously search for new ways to make a living and don’t give up. I concluded that these are the kind of people a country needs, to grow and develop, to be beautiful in so many ways. I truly feel privileged to have been part of that group for a weekend, and I know Coen does as well.

From Caracas we drove west, to Valencia and Barquisimeto. Along the way we stopped at gas stations to meet other members. We breakfasted and snacked along the way on empanadas filled with cheese or meat, cake and cups of coffee.

When complete we were with seven cars and some twenty-five people, including three toddlers and one other foreigner: David, a Spaniard who has lived in Venezuela for the past three years.

Most of the hours were spent on asphalt, passing fields of sugarcane for kilometers on end. Around noon we entered the countryside with hillsides covered in forest or grassy fields without cows.

We took a break in the village of Cuicas (state of Trujillo). The orange-white church on the plaza drew our attention and so we checked it out, wandered around a bit and bought ice-creams.

From the village the winding road narrowed down, forever taking us deeper in the countryside. It worsened into a rock-jagged trail with steep and eroded sections. Slowly everybody conquered the undulating trails with the photographers running around taking photos.

Our goal was a site near a beautiful cave and major waterfall on a thirty-minute hike. We now learned that the waterfall was dry… (although on Sunday, when we were about to leave, another local said that there was water but there was no time left to check it out – this kind of reliability on finding information is not just common in Venezuela but on the continent. It didn’t surprise us at all).

The weekend was simply fun and easy-going. Whereas Coen is outgoing and talks to all and sundry, I can easily be put off by groups of people I don’t know, especially when they are loud and boisterous.

Thank you, Destinos Inteligentes, for making us part of your group!

More on Overlanding in Venezuela 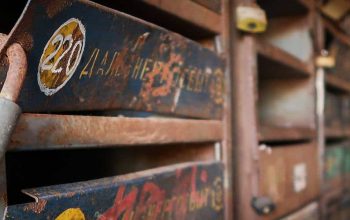 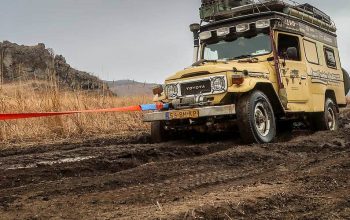 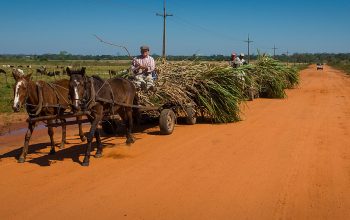 1 thought on “Overlanding in Venezuela”