Tips for the Ultimate Overland Shower

It was a 4-year-old who asked me the question first. A week before our departure, family and friends came to my house for a farewell party. The Land Cruiser stood on the lawn, proud and ready to be driven to Asia.

The Land Cruiser doors and windows were open so everybody could glance or step inside, and the rooftop tent had been unfolded for all to climb up to and admire. My friend’s daughter took it all in, but clearly something was missing.

“Where will you shower?”

I looked at her in surprise. It was a great question. Why hadn’t I come up with the question myself? I had not given the topic any thought during our preparations and so I answered honestly that I had no clue.

Our Overland Shower is Everywhere

The second question came from a friend. By then we had been on the road for some four or five months and she had traveled with us in Turkey for a week. Towards the end of her stay she asked whether we didn’t miss having a shower. We looked at her in bewilderment.

Miss a shower? No, why would we?

Before you start thinking that we never shower, let me assure that this is not the case. However, finding places to bathe, shower or have a quick wash up had not been an issue and this would remain so as we drove farther east, to Asia’s tropics, and, years later, to South America and the Far East.

Each country required its own solutions to ridding our bodies of sweat and dust. We found them in nature, in and around the Land Cruiser, and elsewhere.

Our journey started in June 2003, just as a heatwave was about to hit Europe, including Greece where we spent our first two months of rough camping. Inland we bathed in numerous streams and lakes amidst mountains and forests.

To date, natural baths are our preferred method of washing ourselves.

Little gives such a sense of freedom as skinny dipping in the wilderness far from prying eyes or standing under powerful, meters-high waterfalls – an invigorating shower that includes a thorough shoulder-and-back massage.

We continued using natural places for bathing in Turkey until we reached conservative regions where walking around naked or in bathing suits didn’t do. Only in Southeast Asia did we return to natural baths.

However, in that part of the world, at least in the non-touristy areas, women generally bathe in shorts and t-shirts or other clothes. We encountered the same types of ‘bathing suits’ in some parts of South America, particularly in indigenous communities.

To hit the water dressed like that takes a lot of pleasure out of bathing for me. If it’s hot enough the clothes will dry quickly but when it’s cold and you’d like to change right after the dip, I find it a nuisance having to climb all wet into that small Land Cruiser to put dry clothes on.

After all these years it also still annoys me that I have to cover myself like that while Coen can just swim in his trunks. The dress code may not be mandatory but does have to do with adapting to local customs. But then, not everything in traveling is fun and this is simply how it is.

We loved Patagonia with its pure, wild rivers rushing through the Andes Mountains. No matter how cold, we regularly went for a swim, Coen plunging right in, I one toe at the time. Once your body has adjusted to the temperatures and relaxes, you find yourself bathing in a setting of jagged mountains, glaciers and snow peaks.

What else do you need to feel free and fortunate to be living this nomadic lifestyle? By the way, I make sure we carry eco-friendly soap for these kinds of places.

When on the coast, we strip and take a dip in the sea, followed by a quick rinse from the limited water supply we carry (until we had a watertank system, this consisted of 2 20-liter jerrycans and 1 10-liter shower bag).

Recently I read about this freshwater saving solution: On the Australian coast, Rinus Hartsuijker learned to wash his body with Selsun, an anti-dandruff shampoo containing selenium. After taking another dip in the sea your body somehow remains largely free of salt. Apparently, it doesn’t work with other anti-dandruff shampoos.

But what do you do when your surroundings don’t provide you with a natural bath?

In some countries, the outdoors doesn’t allow us to bathe in lakes or rivers. When we left for our journey we had packed a box with who-knows-this-may-be-useful stuff. One day, when digging through it I came across an old shower curtain. With it we built our first shower cabin, in eastern Turkey.

It works perfectly with the rooftop tent set up. We extend the shower curtain with a sarong using clothespins and attach it on either rear side of the Land Cruiser, stretching it behind the rooftop tent ladder. We then hung the ten-liter shower bag above the rear doors and voila, we could shower without offending local people.

By the way, after twelve years on the road we implemented a major change in our water system. The complete why and how is for another story, but we built a 100-liter water tank underneath the carriage, plus a sink inside the car with a faucet that doubles as shower head – it can be pulled outside to function as a shower.

Years later, in Patagonia, other overlanders showed us the existence of a fancy, foldable shower cabin. Yann and Geraldine, who traveled in a Citroën HY for 2 years, would heat water on their stove, put it in a jerrycan and with a pump, as used in gardening to spray weeds, power the water through a tube and shower head. After a multiple-day hike in the mountains surrounding Fitz Roy, we were grateful for this five-star system, low-budget overland shower.

Our improvised shower cabin worked in the remote areas of Turkey, Iran and north Pakistan where at least we had some personal space (when rough camping). However, personal space does not exist on the subcontinent (the rest of Pakistan, India, and Bangladesh). In order to get a quiet night’s sleep we asked for permission to camp in parking lots of restaurants and hotels.

We paid a fee to use a shower and toilet in one of the rooms, or there was a toilet-cum-shower for drivers we could use. Granted, the latter is not the cleanest places in the world but they worked. Occasionally, the manager of a luxury hotel would offer us to use the swimming pool, which clearly was a privilege we thoroughly enjoyed.

At other times it was too hot in cities to camp and we paid for a cheap hotel room just to be able to shower a couple of times a day.

Over the past year we have been traveling in Japan and South Korea. Although we had bathed in a number of natural springs in Andean countries, in the Far East bathing became a whole new concept. Both countries have an extensive system of hot baths / hot springs. In South Korea these gender-segregated public bathhouses are called jjimjilbangs, in Japan onsens.

Nowadays most people, if not all, have bathrooms in their homes. Yet they still like to regularly visit these public baths. While some use heated tap water, the majority of onsens in Japan are built around natural hot springs that are readily available thanks to the country’s subterranean volcanic activity. These waters contain all kinds of minerals and are appreciated for their curative powers.

Since part of our travels in the Far East has taken place in autumn and winter, we have been most grateful for these hot baths. They vary from basic, free of charge ones up to the most elaborate spas with all kinds of facilities.

Our favorites are the open-air hot springs (in Japan called a rotenburo). Often they are in lakes amidst mind-blowing mountainous wilderness (not all are accessible when there is snow) or on the coast.

And if none of these opportunities arise there is always the overland shower #4: filling a container with (heated) water for a body scrub inside the Land Cruiser.

As I said at the beginning of my story: there is no need to worry about ways to shower. There are ample solutions!

What overland shower systems do you use on the road? Share with us in the comment section below.

Check out: Shower in Style with Landcruising Adventure’s Shower Curtains 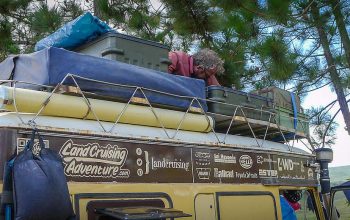 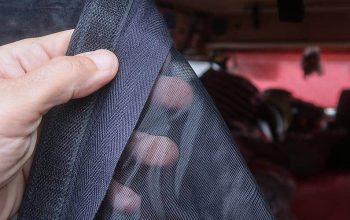 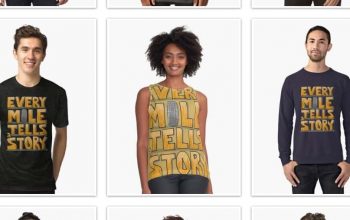 2 thoughts on “Tips for the Ultimate Overland Shower”