This year was our tenth Overland Reunion. The first three were at friends’ homes but since 2009 we have organized our reunions on a campsite in De Lutte, in the east of the Netherlands.

Over the years the number of visitors has been growing and we guess that about 30 vehicles and some 60-70 people joined the fantastic weekend this year.

This year there were quite a few families with kids, some of whom traveled with kids, others who started a family after their overland journey.

The number of visitors from other countries has increased as well. This year we had friends from Belgium, Germany, England, the United States and even Australia. All in all a mixed and fun bunch of people. While we never had more than a slight sprinkle of rain during one or two weekends, the weather has never been so fantastic as this year. Many drove to De Lutte on Friday. In fact the first family already arrived on Wednesday, and one couple decided to stay until after the weekend to do some cycling in the beautiful, forested surroundings of the campsite. Other than that we’ve continued the ritual that seems to work for all of us: we came and went as we pleased. Some stayed the entire weekend, others simply checked in for a cup of coffee or the BBQ on Saturday night. We all brought our own food and beverages while freely sharing with new visitors who were not familiar with the system, or those who intended to drink a glass of wine but who ended up staying for the BBQ because they were having such a great time.

What I really appreciate about this event is that digital devices are conspicuously absent. While few may show slides on their laptop to elaborate on technical or car-building issues of their vehicles, our overland reunions have been proof that it is still possible for people to spend a weekend without freakishly checking mobile devices! Do you want to attend? Sign up for the Overland-Reunion newsletter.

For more on the Overland Reunion, check out these articles: 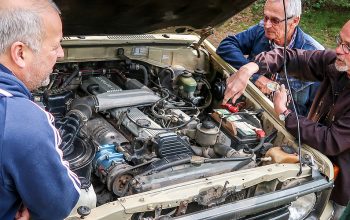 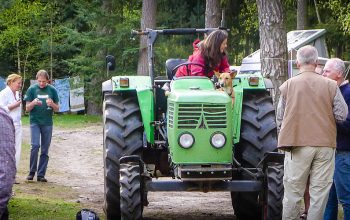