This is part 2 of a 3-series story of the third overhaul on the Land Cruiser and how we remodeled it with a water tank, sink, and a whole lot of other stuff. Links to the other stories: part 1 and part 3.

Just a little tip up front: The simpler your water-tank system, the fewer headaches you’ll have.

While our heavy-duty water canister is bomb proof, we found it hard – and in some countries impossible – to find top-quality water canisters (outside Europe). As a result our second canister is one of those red, plastic, high-quality fuel carriers that are used on boats. For years a better water system simmered in the back of our heads but we never took the time to make it happen. A good water system is one of those things to think through before departure and to install when building your vehicle. Oh well, we took 12 years to get to that point…

In Barquisimeto (Venezuela) a piece of the exhaust broke off. Car problems never happen in a good moment but sometimes – particularly in retrospect – they were a blessing in disguise. This was one of those moments. I found what may be one of the best exhaust shops in Venezuela: Cobra Silenciadores. The original Toyota muffler, which we installed 12 years ago, was still in very good condition thanks to the Brazilian exhaust specialists in São Paulo who had wrapped it in a thin sheet of stainless steel. But the rest was falling apart.

Around this time I had started to think about a short exhaust that would exit on the side, just before the rear tire. I had seen it on newer Land Cruisers. This system would free sufficient space under the Toyota to install a 100-liter water tank (the original exhaust passed diagonally under the car, taking up a lot of space). From Exhaust to Water Tank

Alejandro told me he could build me any exhaust system I wanted, but due to the financial state of the country he couldn’t get his hands on stainless steel pipes. Within a few hours we had custom-built a perfect exhaust system. In the days that followed we made some slight modifications to get rid of vibrations and heat. I was happy with the result.

While walking around and helping the guys, I noticed how they had excellent welding skills and that they had all the tools to weld stainless steel. It dawned on me that this might be the perfect place to get a water tank made. The workshop even had a CNG plasma cutter! I asked Alejandro about it and he told me his guys would help me.

Read More: Problem Solving on the Road – A Good Workshop in Ecuador Getting food-graded, stainless steel was a whole different issue, but I was told there was a scrapyard that specialized in this. A few blocks away I found the caretaker behind a locked gate. When I told him about my ideas and our trip, he was all smiles and let me in to look around.

I quickly spotted two suitable tanks that could be welded into one water tank. I had no idea of market prices for stainless steel so I asked him straight for a just price. He answered that for the equivalent of $20 we could take both tanks. I tried not to blink and had to restrain myself from running to the car to get money and shout for joy.

With the basic material in hand I returned to the Cobra guys and only then discovered that the back side of the workshop is called Metalwork. We took about five days of cutting and welding to fabricate the tank as well as the metal brackets to hold it in place. I couldn’t steal too much time of the guys as they did all this work in between their regular work. I had the metal straps powder coated and braced them in thin rubber.

I found plastic plugs to close off the inlets that were in the tank as I didn’t have time to think about the next step – connecting the tank to tubes, filters, and a faucet. That would be somewhere in the future. The tank was there and ready to be connected to a water system whenever we wanted.

The future came sooner than we had envisioned. When we dismantled the Land Cruiser in Guyana and remodeled the car in Suriname, we realized that this was the moment to install a proper water system as well.

We had a vague idea of what was needed to get water out of the tank to a faucet and to get drinking water out of a filter, but I had to order stuff as locally I couldn’t find what I needed. I searched online and learned that there are a number of shops in the Netherlands that have everything you need to build your own camper. 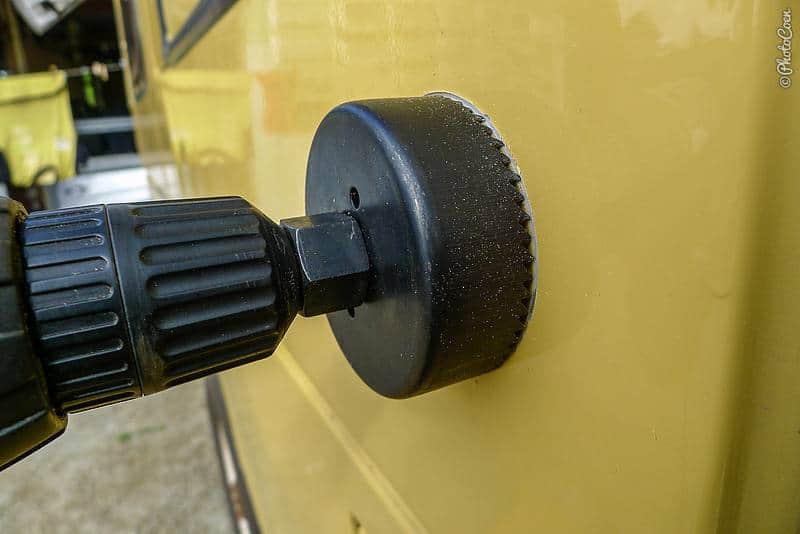 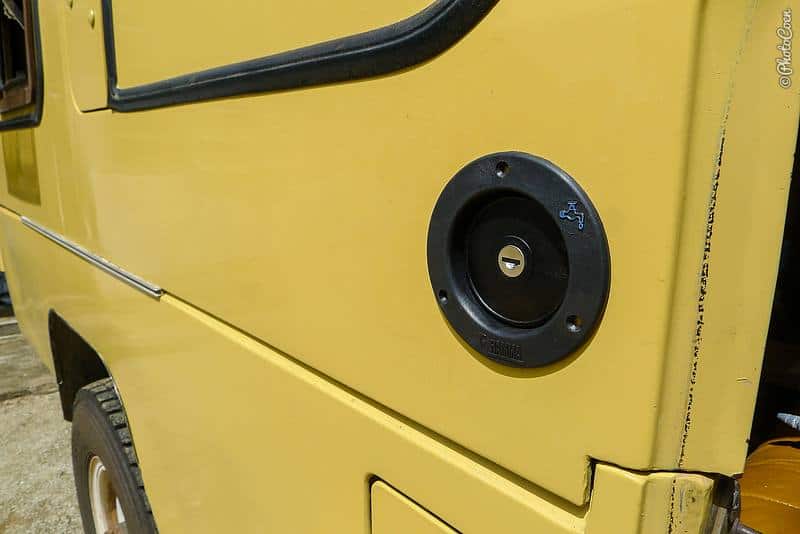 Even though I drew everything out on paper in order to see how the systems would connect, online descriptions didn’t always give enough information. So it came to no surprise that when all the stuff was lying in front of me, I had to improvise to get everything connected. In the end it worked, even though it may not be the most beautiful solution. How to Get the Water In

To get the water in the tank I had to cut a big hole somewhere. The obvious place would be the converted window panel, made of aluminum sandwich board. It would be easy to cut and I wouldn’t have to touch the original body.

However, looking on the inside, the hose would come in too high and obstruct with too many things. So I cut a hole just above the fuel inlet and used the same fuel housing to get the hose down to the tank. How to Get the Water Out

To get the water out of the water tank, I laid the blue water hose behind the insulated wall and installed the coarse sediment filter together with a valve right where it enters the Land Cruiser (just outside the fuel housing ).

On the other end of the line it became more interesting as well as complicated, because of limited space. Everything had to be installed into the rear back-end corner so we wouldn’t lose valuable packing space. It took me days to figure out the optimal way to install the various pieces. I must have changed that set-up at least three times until I found the solution.

Thinking out of the box generally works best, and my trigger was Karin-Marijke’s question why the pressure tank couldn’t be set aside from the rest. It was not the best solution as it meant that hoses would bend 45 degrees every time we would need to access the water system’s core, but at least it now all fit.

From the Water Tank to the Sink

The water-pump sucks water through the line when you open anything after the pump. This means that when there is a leak, the pump will continue pumping water. To prevent this from happening, I installed a switch to cut the power to the pump.

From the pump, water flows either directly to the faucet for the sink, or to the water-filter set-up. The latter consists of a normal sediment filter as well as a UV filter. From the filters it flows to a faucet at the rear of the car, which we will use only for drinking water.

On the end of the faucet for the sink we installed a hand shower with a valve to turn it on or shut it off. The hand shower still needs to be installed on the inside of the lid above the sink. We can pull the hose outside through the side window; it doubles as a power-shower. We may get a longer hose which will enable us to shower on different spots around the car. Things we still need to figure out:

What are your experiences, challenges, tips for installing a water system? Feel free to share in the comment section below. 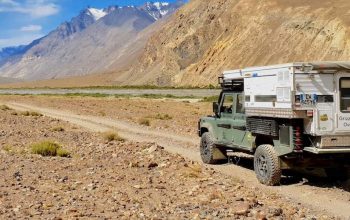