When traveling from one country to the next, let alone to another continent, it’s hard not to compare. And while doing that, we tend to focus on what we like about the new country – and thus not so much about the country we just came from.

In the beginning of our journey I felt bad doing that. But we learned that this is just part of the process, and perceptions will change. In fact, when traveling long enough in one given country/area most of us will go through these phases:

And, by the way, if you stay too long and start getting annoyed by things that initially excited you, it obviously is time to go! And so, on our arrival in South Korea, spending our first week in Seoul, we were blown away by some of the things we saw and experienced. Sometimes because we had never seen it before, sometimes because it stood in such contrast with South America (in particular the northeastern countries of that continent).

I’d like to share some of those moments with you but will leave out the typical sightseeing part because well, the palaces and temples simply warrant a blog post of their own. One of the first things we looked at on arrival in the airport were people. Of course, features are quite distinct from South Americans but there was another major difference with Latinos (indeed, I barely touched Korean soil or the comparisons started…): shoe wear. No heels, no spikes but flat soles, mostly sneakers. I felt right at home!

A country full of modern gadgets and with people forever taking selfies (is there a country where people take more selfies?), but who in other ways care for things from the past (maybe this is a romanticized image; we were told that wearing traditional clothes has a more practical element to it: you don’t have to pay an entrance fee to the palaces). 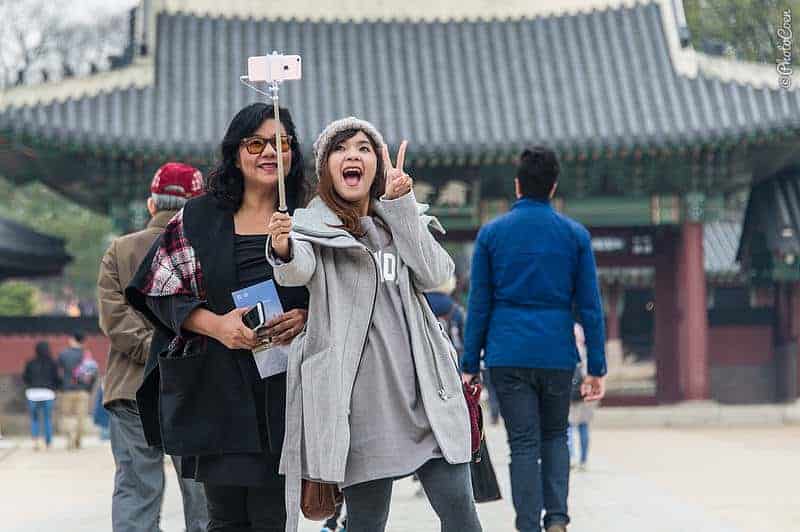 While Korea is a highly developed country, that doesn’t mean everybody has access to material wealth. Compare the fancy equipment for a (pizza) deliverer vs. a simple cart for an old-paper collector. We love the Koreans’ passion for spending time outdoors. They work their asses off during the week, working 12 hours per day is nothing, and then they have to go drinking with their co-workers afterward (which in a way is considered working time as well).

In the weekends, on the other hand, it feels as if all Koreans are outdoors! Either dressed the part in outdoor outfits – including sticks and gloves, even when just hiking on asphalt – or in casual clothes for a picnic. Which brings me to the next topic:

Easy enough: we love it! The Koreans have turned their food into art. Even the hikers. We initially wondered what was in the somewhat humongous day-packs they are carrying. But here you don’t take a peanut butter sandwich with you in a plastic bag, which you eat while sitting on a fallen trunk of a tree.

Nope: from the daypacks come a picnic mat/blanket, sometimes even a small, foldable, super lightweight table, and out come the dishes: all kinds of side dishes, the bowls, the chopsticks. Picnics are a thorough celebration of life in this country!

We feel privileged to have been invited by Koreans. They have accommodated us and taken us to restaurants, which has always been a feast. Apart from a delicious meal we were flabbergasted by how it was served: the waiter rolled up a cart next to our empty table.

Instead of putting all the dishes on our table, the waiter simply moved an entire table top from his cart over our table. Efficiency it is (it went so fast Coen had no time to take out his camera). A contrast to elaborate meals are the simple, but just as tasty, snacks that you can buy from one of the many vendors lining the street. We love kimbab (Korean version of sushi) which is a perfect snack for on the road (you’ll find it around easy-to-find places such as bus stations and in subway stations). Supermarkets are heaven for graphic designers: they display only fancy-packaged food.

Thanks to our hosts Jin and Sonna we are learning a lot about food. Each time I note what we eat and puzzle on how to spell it in Korean. How in the world are we otherwise going to order food when just by ourselves (being plant-based eaters doesn’t exactly help, although I will add that Korea offers plenty of options for us in this respect)? Thankfully the alphabet is easy to learn, contrary to the pronunciation and we’re having a lot of fun figuring it all out.

E.g. when the other night Sonna named a dish, I heard something like ‘Dlike’. I asked her to check my spelling. Huh? She was saying ‘Deulkkaetang’. Right.

Thankfully the road signs are in our alphabet as well (for the 5% of the people in Korea who are foreigners, Jin told me). Architecture in and around Seoul

So was everything fantastic and overwhelming? No, I think if there’s one thing that we find disappointing, if you could call it that, it’s (modern) architecture. Yes, there are a couple of impressive buildings in Seoul but not that many when realizing the city numbers 10 million people.

Here are the buildings ones we really liked, or at least stood out from the rest. Some buildings came with impressive details: immense escalators between the asphalt and the subways that run on the lowest level, plus one apartment building at night displaying a constantly changing façade of color.

However, below is pretty much what Korean cities look like: immense collections of apartment blocks. They may be comfortable, offering what people are looking for, and yes, I know there is little space in this country but lots of people, so constructions are space efficient (Korea is about the same size as Portugal, consists of 70% of mountains and is home to some 50 million people).

The majority of these blocks look the same and are ugly – in fact, the ones in this photo are quite nice compared to most others, which are dominated by grey and grey. Adding a bit of color would do so much. Clearly functionality rules over esthetic. I’d say there’s a job for Hundertwasser here (No idea who he is? This will give you an idea).

Moving closer into neighborhoods we see these ugly buildings, many of which are paid for by companies and can be used by their employees. Many buildings are numbered. The nifty thing, and new to us, is the door lock.

No more keys but all doors have electronic locks, opened with a code. Very convenient when traveling and e.g. using Airbnb or when being invited through the Internet: instead of having to set a specific time to meet because otherwise there’s nobody to open the door, you now simply get the code emailed. 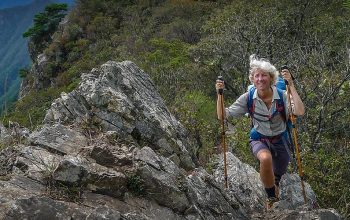