Our three-month road trip through the Seven-sister states of India started in Assam. After a couple of days we turned south, to state #2: Meghalaya.

Where is the Key?

Coen had gone downstairs to get something out of the panniers and returned to our hotel room in a panic.

“Somebody moved the bike last night and when I locked the pannier, the key fell out of my hand and into the sewerage!” And he ran downstairs once more, followed by me. The hotel manager already stood next to the bike, calmly taking in the situation.

Part of the garage floor consisted of heavy concrete slabs that covered a sewerage. Even if you had wanted to deliberately throw a key down that narrow opening between two slabs in one go, you most likely wouldn’t have succeeded, it was that small. We took turns gazing down the black hole using the light on an iPhone.

Coen spotted the key! Not all was lost, which would have been such a pity after less than a week on the road.

“Easy! All we need is a bit of wire with a hook and we’ll get the key out no time,” was his judgement.

Meanwhile the manager had already gone back inside and was returning with a wooden stick.

“No, no, just a wire with hook,” said Coen, taking control of the situation. However, the manager didn’t have that.

The manager got a crowbar and pushed the slab of concrete aside. This did create more space, however, as a result of prying the slab loose, sand had fallen down and the key was now lost in a murky black substance. Before the manager had a change to search for it by rummaging around with the stick Coen stopped him, arguing to wait for a few minutes for the murkiness to settle.

He was right. When the mushy drab cleared up it was easy to see the key. Easy peasy. Well, that was until Coen dropped the stick! Luck had it that if fell against an edge and was easy to grab.

“Thank God for that, otherwise we would have had a real problem,” the manager said, relief visible on his face.

They retrieved the key and our journey could continue.

Check it out: the Landcruising Adventure Duvet CoverCollection

It was 10am by the time we left Tura, the main city of the Garo Hills in western Meghalaya. The city is built on a mountain slope with narrow, meandering or hairpin roads with some of them being one-way. The driving in Meghalaya was a relief after hectic Assam. No honking of horns, no dangerous overtaking, people sticking to their lane while chugging uphill.

The majority of Meghalayans is Christian. We spotted graves and regularly passed a church. Texts of wisdom, from the Bible or otherwise, were painted on walls – in English as well as in the local language. I took pictures but because I’m not particularly good with our camera none of them were focused and thus the texts unreadable. Which is unfortunate because now I can’t share them with you.

Once out of Tura, the road hugged thick forested mountain slopes, kindly meandering on new asphalt – the perfect road conditions for a motorcycle trip. After ten miles or so we left the main road and before heading into the interior we stopped at a tea stall for a cup of India’s ubiquitous milk tea.

It was run by a woman and her kids and we asked for their names. Incredibly long names followed, impossible to remember or reproduce so I asked one of the daughters to type them in my phone. Thus we learned that when people say their name, they mention their first name, middle name or letter, and last name in one go.

It’s like when asking Coen’s name he wouldn’t answer with just ‘Coen’ but say, ‘CoenBernardWubbels’. Everybody seems to be doing that here, we realized over de days that followed. For some reason I never succeeded in getting them to say just their first name.

Back on the road we passed houses made of bamboo mats, took in endless views of the jungle from which resonated fierce, high-pitched cicada screams. On our right was a river with low water flowing over large boulders. People greeted with a smile. Women carried wood in a bamboo woven basket on their backs, holding it in place with a band across their heads. The Enfield purred with joy, and felt powerful and reliable.

We entered the national park by taking a wrong turn, steep down and ending in a mud bath. Coen turned the 175-kilo-weighing bike around, not an easy feat on a narrow, unpaved stretch and he bounced uphill while I walked. I got back on the bike and we enjoyed a gorgeous drive through an ocean of forest, green all around until the horizon.

The dead-end road ended at a hamlet. At its entrance and a bit away from the rest of the settlement, stood a large, red stone house with a terrace of wood and bamboo offering a fabulous view of the park. It turned out to be a homestay but they couldn’t receive guests that night because they had to leave early morning for a wedding. Coen asked if it was okay if we’d pitch our tent just below the terrace, which was fine with them in return for a small fee for the caretaker.

A group was about to return from a hike and food had been prepared for them, there was more than enough and so we could stay for lunch. They served rice, dahl (lentils) and a typical Garo pork dish. Pork dishes are popular among the Garo. They are super spicy and come with or without bamboo shoots. We were still blown away by the amount of rice local people eat with their meals in Meghalaya, something that later on we’d encounter in Tripura as well.

Government signs abound with instructions on minimizing plastic and explanations on how long it takes for various materials to decompose. “If you can’t reuse it, refuse it!” said one of the signs. Single-use plastic is officially banned since July but note the word ‘officially’ – there’s still a long way to go, but there are clear signs of awareness.

The owners of the house were all super friendly, smiling people, which is our general impression of the A-chick (lit: ‘Hill people’) in the Garo Hills. It’s quite contradictory to their infamous past when they had the reputation of being fierce warriors.

We set up camp and I walked part of a trail that zigzagged all the way down to the river, I assumed. I didn’t feel like having to climb all the way back up so I turned around halfway but still had a fantastic view. I stood in the middle of an incredibly world of  green vegetation and felt tinier than an ant in this vast, impenetrable wilderness.

Read More: Throttle Adventure – the First Kenyan Couple to Motorcycle around the World

The sun set at four thirty; it was dark at five. Time for the insect world to wake up and start their thousands of concerts in all kinds of keys and rhythms. The fog dimmed the bright lamp next to the house above us, which contributed to a sense of being in an ethereal world. No man-made sounds and sitting on a small veranda of bamboo poles and mats, it felt as if we were the only two beings on this beautiful piece of earth.

We are just on such an amazing journey!

The Royal Enfield across Northeast India

Check it out: the Landcruising Adventure Sock Collection 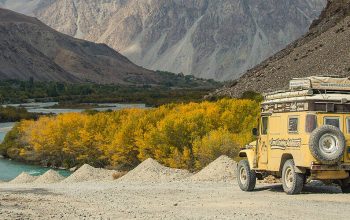 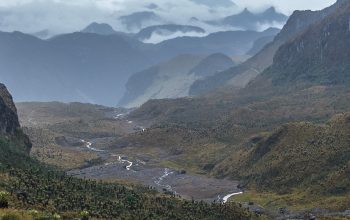 2 thoughts on “Taking the Royal Enfield across Meghalaya (India)”