Hashing in Suriname (and the World)

“You have to come forward.”

“Your name was mentioned,” my neighbor said.

Now I heard it as well, “Will the virgins step forward, please?”I didn’t exactly consider myself a virgin; however, my neighbor insisted I was. And so was Coen, she added.

Coen and I moved forward and were put on the Grand Master’s left, while Ine and Henri (the other virgins of this night) stood on his right.

What the heck was going on?! Minutes later we were holding plastic cups filled with beer. The microphone was held in front of our faces. What did we think of our first hash?

“I kinda liked the thing with the shredded paper,” Coen commented.

“I just signed the two of us up as members with Thea,” I said.

The gang of some 50 hashers sitting and standing in front of us broke into a song. I felt as if I’m in a student café with new members being initiated. The song is in Sranan Tongo, of which I didn’t understand one bit, but the last words were in English – and were an order, “Down, down, down, down…”

The plastic cup had to be emptied in one go. So much for my intention to drive without alcohol in my system. But I returned to my seat with a smile. Our first hash was fantastic and I felt at home immediately. What is the HASH in Paramaribo?

The gathering was as informal as it could get. We were all dressed in loose-fitting clothes: shorts, jogging pants, sleeveless shirts, T-shirts, and we were all thoroughly sweaty with our hair sticking to our scalps. With 40 to 50 men and women we just finished running 5 to 8 kilometers around Palm Village, in Commewijne.

Every Monday, at five-thirty, the Hash House Hariers (or HHH) meet up at somebody’s house or at a more general meeting point such as a bar. Depending on your condition you either walk or run, or do something in between.

The route is indicated by heaps of shredded paper along the side of the road, which each week is set by different people (called the ‘hares’). The Origin of the Hash House Harriers

The HHH started in the 1930s in Malaysia. A diplomat decided to go running on Mondays in order to get rid of the alcohol he had consumed during the weekend. Friends followed and soon the running included socializing – with beer, obviously. The story about the HHH’s origin has some variations but according to one of them, their original point of departure was a Chinese restaurant named Hash House.

As it goes with diplomats, they were transferred to other countries and through the years, the Hash House Harriers were established in over 180 cities and now has hundreds of kennels. Most run on Monday night. For some kennels this doesn’t work.

Edited to Add: Here’s a great documentary on the history of the HASH

We were told, for example, that there were 7 Hash House Harrier kennels in Washington D.C with each running on a specific night. After our hashing in Suriname we hashed in, among other places, Bolivia (on a Saturday afternoon; it’s only every 3 weeks), in the Netherlands (during a weekend as well), in Lima (Peru), in Costa Rica (Coen), in Japan, and in Kyrgyzstan.

The Paramaribo HHH has existed since 1989. Because initially it was a kennel of runners, harriers, the name of a fast British hound of the harrier race, was added to the name at some point in time. Running around the Commewijne District

Hashing in Suriname mostly meant running or walking in Paramaribo, however, this one was held in Commewijne, a district east of Paramaribo. Palm Village, where we walked today, was a new residential area for the affluent middle class. Luxurious houses were built on large lots and you could only access the neighborhood via one gate that is guarded 24 hours per day.

The walking route zigzagged through the young, little-shaded neighborhood. Palm Village didn’t live up to its name yet. Palm trees were conspicuously absent, or still very small. Apparently they need many years to grow to a decent size. In fact, the neighborhood was largely devoid of trees.

We continued on the main road towards the Wijdenboschbrug. It was one of those typical death traps due to cars that kamikazed their way down the road, even though the road was narrow and lots of people were walking here.

In Surinamese traffic, pedestrians (or runners for that matter) have no place in the traffic hierarchy. Fortunately, the paper shreds soon led us to a sand path on the right. The wet season should have finished. It hadn’t. We continued having daily downpours and combined with the high tide, this almost caused the Suriname River to flood the banks. The sand path disappeared in the grass and because of all the water had become a quagmire. The mud came with the pleasure of exploring unfamiliar territories.

Shredded paper indicated we were on the right track (or not). The runners went up front. When they encountered a cutback – a cross made of shredded paper – they turned around and searched for another route. This way they covered a longer distance than the walkers and it kept the group more or less together. Good hares (those setting the trail) manage to get the group to the finish around the same time.

We returned to the main road and crossed to the other side. Back to sand paths, free of cars. Bliss. Trees offered shade. This is the village of Lust en Rust, which is one of our favorite areas in Commewijne.

With a number of women we ran and chatted while introductions were made. We were quite in the forward line, which gave me confidence. I had worried a bit beforehand about not being able to keep up with the group.

Planks have been put across ditches to facilitate crossings. Cows were grazing the fields and, typical of this country, we were continuously accompanied by the twittering of birds.

Back in Palm Village it was time for the after-Hash. We were in luck. The Paramaribo HHH had existed for a certain number of years, which was the reason for a party.

Socialising is part of the HASH tradition, but tonight we were fed as well. Our host Yvonne and Rignald feast us on loempias, bakabanas (both fried snacks) and saoto (a type of soup).

Judging from the enthusiasm on the dance floor you wouldn’t say these people had just covered such a distance. The crowd went crazy. We sang along as we danced to cheerful Surinamese rhythms that alternated with terrific dance music from the 1980s.

While dancing I looked around. The people here represented more or less all ethnic groups that are part of Suriname. Before coming here I had wondered if the HHH was a typical expat club. Fortunately, it wasn’t.

Apparently, it did start out that way when the HHH in Paramaribo was established by people from the Dutch embassy, but tonight I see Maroons, Creoles, Javanese, Hindustanis, Chinese, Dutch Surinamese, whites and all kinds of mixtures.

I was happy to have found this group and signed up. Eventually we lived a year in Suriname, and Hashing on Monday definitely was a highlight! 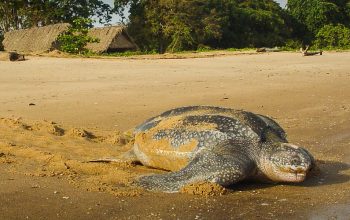 5 thoughts on “Hashing in Suriname (and the World)”