Tucked away in China’s northeastern corner, the Heilongjiang Province isn’t the most commonly visited region in this massive country. All the better to go there, especially in summer when temperatures are pleasant and the hordes of local and international visitors focus on other regions.

In this City Travel Guide we will focus on Heilongjiang’s capital city: Harbin.

Harbin was part of our 3-week itinerary during which we crossed the northeastern provinces by train and bus, staying mostly in cities along the way. What does Harbin have to offer? We had no idea. To find our way around we bought Lonely Planet’s Shandong, Jinan & Northeast China (no longer available, take a look at Lonely Planet’s China Travel Guide) and Insight Guides China (ebook).

Harbin in a Nut Shell

Harbin, the capital of Heilongjiang Province, is arguably best known as ‘Ice City’ because of its incredible Snow and Ice Festival in winter.

In summer Harbin has its own attractions, which we’ll talk about here as we visited the city in summer.

Being the birthplace of the Jin and Qing dynasties in the 12th and 17th century, Harbin subsequently was strongly influenced by Russia when it financed the construction of the Chinese Eastern Railway, which was later extended to the Trans-Siberian Railway. Many Russians lived in Harbin, which is still visible in some of its architecture.

Once a small hamlet on the Songhua River – Harbin means ‘a place for drying fishing nets’ in the Manchu language, Harbin grew into one of the biggest cities in Northeast China. With a small, shady and pleasant downtown area with pedestrian streets, a riverfront and a number of historical and religious sites, Harbin is well worth a visit.

Read More: Northeast China Travel Guide – Why Visit, Where to Go & How to Travel

We particularly enjoyed the old part of town. The area around the cobbled pedestrian Zhongyang Street is home to beautiful 19th and early 20th century buildings. The old quarter is vibrant with street artists and locals dancing in the evening.

At the far end of the pedestrian street runs the riverfront. A wide boulevard shaded with trees, it’s where many locals go at night or on the weekends. The area is alive with street artists live music, and a couple of places to get a drink or a snack.

Harbin is one of China’s cities where many nationalities can apply for 72-hour visa-free transit when they arrive at the airport. Do make sure to have an onward ticket.

Transportation from Beijing to Harbin

You have various ways of reaching Harbin:

We took a night train from Beijing, which was comfortable. Having said that, many trains ply this route around the clock. From Bullet trains to Overnight Trains, you’ll find tickets varying in price and length of time, so take your pick.

I shared a lot of details on traveling by train and bus in Northeast China in this blog post.

Downtown you can find your way around by metro (2 lines), buses and taxis.

You’ll find plenty of options but let me focus on two of them: one being the popular BBQ restaurants near the riverfront and a surprisingly good and cheap vegetarian restaurant.

There is quite a lot of sightseeing to be done if you’re into that while if you’re not, opportunities for watching daily life and strolling about under shady trees are just as plentiful. Truly, allow yourself a couple of days in this surprisingly pleasant city.

The city has a number of different places of worship among which a mosque, a synagogue, the Buddhist Temple of Bliss, the Harbin Confucius Temple and a marvelous church. Do note that some places close early, e.g. the temples closed at 3.30 p.m.

The St. Sophia Church is the largest Orthodox Eastern Church in China. It was built in 1907 and while we are thrilled to see such old buildings being maintained, it was a pity it happened when we were there. This is, without a doubt, the most beautiful church in Northeastern China.

“Long before the Jewish Autonomous Oblast existed, many of Russia’s Jews flocked eastwards to Harbin to escape persecution and start new lives. Since Alexander III and (to a lesser extent) Nicholas II were under the influence of their ultra-conservative childhood tutor, Konstantin Pobedonostsev, the prospect of deportations, education quotas, disenfranchisement, and even pogroms made an eastward move more tempting to Jews.“

Zhongyang Street and the Riverfront

The pedestrian Zhongyang Street and riverfront are, as mentioned above, alive and just a joy to wander about. For the architecture buffs there is the eclectic mixture of building styles to admire in this part of the city.

Read More: Hiking the Great Wall away From the Crowds

And if you’re tired of all that sightseeing, take a rest in the Sun Park at the north bank of Songhua River. It’s a large park with many fields for a picnic or to play a game. Have a drink along the waterfront, admire a bit of art and go for a leisurely stroll. 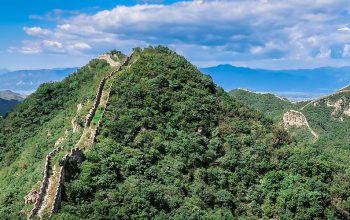