Despite the blockades (read about it here) we reached Guyana’s gold mine region and search for gold and the industry around it.

It is a startling idea.

Although, on second thoughts, “wading through gold” may be a better way to describe it. Without thinking I follow Antonio through a bath with “magic mats”, as the miners call them. These mats catch gold dust and gold flakes from the water that comes rushing through a wooden box at full force. Who knows, a flake may get caught underneath one of my toenails.

Below an almost vertical wall of about 30 meters high, two miners are using all their strength to each keep a hose under control from which chocolate-brown water bursts at full force. When the spout of water hits a solid piece of rock this happens with such force that it will throw the man holding the off balance.

Carefully the two miners calculate where to aim the continuous flow of water, assiduously breaking up large clumps of clay; when they hit a piece of rock another worker will grab it and throw it on a pile, because these rocks don’t contain gold.

Personal Tour in a Gold Mine

I can hardly believe I’m here, in the middle of a gold mine, in one of Guyana’s important gold mining regions. Antonio says this is a small mine, to me it comes across as huge. Mahdia is the central town of the region and has somewhere around 10,000 inhabitants. How many people live in the mining areas, Antonio can’t guess. “Many.”

He does know that there must be about 600 excavators around and he speculates about 50% of the mines in Guyana are legal, although he has no statistics to prove it. It’s based on his 20 years of work experience in this country.

When we drove to Mahdia this morning, our eyes caught a destroyed part of the forest. We parked the Land Cruiser along the side of the road and walked up to the pit. We were intrigued by what we saw and decided to see if we could get permission from the mine owner to see more.

The camp is fenced in and we had to walk all around it to enter. Coen considered bringing the Land Cruiser but didn’t feel like walking back to get it. We were welcomed by snarling dogs and a man with a weathered face under a cowboy hat who studied us from a distance.

We stopped at the gate and realized our mistake: here was Coen with a big camera, looking like an annoying photographer/journalist ready to report anything that can be explained as bad and ugly. Instead we should have arrived with our Land Cruiser, which generally brings out a smile, and a wholly different way of starting an acquaintance.

Are We Allowed In?

But there we were and at least it helped that we speak enough Portuguese for a proper introduction. We explained who we were and what we wanted.

“Just curious tourists, taking an interest in how other people live.”

“Come on in,” he said reluctantly and motioned us to sit at the wooden table covered with a piece of blue-white checkered plastic.

Antonio, as the Brazilian introduced himself, was honest with us. He explained how pictures and stories would only cause problems because of environmental issues.

We knew this was coming and his mistrust was totally understandable. Coen decided to get the Land Cruiser. I emphasized we were not journalists, that we leave the information about the ugly and the bad, the environmental issues and criminality to them. That we prefer focusing on the other side of life and like to share that part with our readers.

I touched a chord.

A Better Way to Separate Mercury? The Retort

The use of mercury is still legal in Guyana although you can’t buy it in endless supplies. When the magic mats (see 1st paragraph) are cleaned, all this water is panned by adding mercury to the water, the gold dust and tiny flakes sort of glues together.

One of the main health issues is that to, afterward, separate the gold from the mercury the nugget is heated with fire which causes the mercury to evaporate its this fume that is so harmful to the human body.

Antonio shows us a piece of equipment: a retort. We’ve heard about it but never seen one. The simplicity is staggering. In order to separate the mercury from the gold, the goes in a receptacle that is carefully closed with a thick metal lid from which exits a tube that goes down into a cup with water.

The retort is connected to a gas cylinder which looks like the regular cylinders people use for cooking, but has a much higher pressure in order to create a higher temperature.

The nugget melts and the mercury fumes exit through the narrow tube down into that cup of water. The gold remains in the receptacle. No open fumes, no health issues. Just a bit of mercury in cold water that can be reused. The damage is minimal.

We are completely staggered. Why isn’t everybody using this? Later we discover that although the government is working hard on awareness of malaria and HIV/AIDS – at least judging from the number of posters we see in every shop and everywhere downtown Mahdia – some miners are still ignorant about the effects of mercury.

When that afternoon a miner hitches a ride with us downtown, he tells us how he knew somebody who had drunk the silver, as they call mercury here. He was still aghast. “Well, you can take as much as you want. No problem,” Coen answers.

“It’s the fumes that are toxic. They will kill you.”

This was obviously a first for this 40+-year-old man who had been a miner all his life.

We can’t leave Antonio’s goldmine without eating a meal.

How can we decline? We’re always in for a good plate of rice, beans and fried fish. Maria is a good cook, Antonio says.

“She has worked for me for 6 years. Recently she took a break for 3 months. During that time I had 6 others working here. Women think it’s easy to cook for men. It’s not. Food has to be good. Quando no , no – If it’s not good, forget it. You’ll get into trouble with the men.”

Read More: Overlanding in Guyana – Tips on Where to Go

Check it Out: Our Tank Top Selection 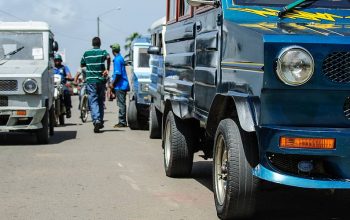 1 thought on “Gold in Guyana – Visiting Gold Mines Around Mahdia”