As we were leaving Peru (read about it here), I started reading up on Ecuador, the 11th country we’ll visit in South America. A couple of things stood out:

Which gave us an idea what to focus on in Ecuador: Enjoying nature in the parks since there’s not much left elsewhere, and learning what the impact of those big companies is on Ecuadorian life; the good and the bad. Two Hours to Fill in a TID?

We decided to forgo the bigger border crossings along and near the coast, and instead took the much smaller border crossing at Zumba. The paperwork in itself was easy enough, like everywhere in South America. Unfortunately, the Ecuadorian customs official had no knowledge of working on a computer so it took him two hours to process our Temporary Import Document.

It still baffles me how Coen stays patient and friendly with an official displaying so much ignorance – but he does, and that’s exactly why he takes care of these matters and I stay with the Land Cruiser. It’s an arrangement we’ve had for years (he even gets my visa stamps) and works best for all parties involved. From a sunny morning we drove into a cloudy afternoon and from cool mountains we entered the tropics. The driving was reminiscent of entering Vietnam years ago: the climate, the rainforest, the small settlements around us, the beat-up dirt road.

Talking about forest, well, actually there isn’t too much left. Enormous parts have been cut for farming and cattle breeding. The latter is a big word for the one or two cows the average farmer has. El Español (about whom more later on) told us that in this region a cow needs 1,5 hectare per year as the soil is poor for growing grass. After 5 years the owner maybe gets 50 dollars for his cow (which gives only 7 liters of milk per day), and subsequently burns down more forest for another cow.

As we moved north, slowly as ever, I noticed that at least until Cuenca (that’s where I’m writing this post) this scenery dominates the landscape: mountains once covered in forest, now largely deforested. Of course, people need food and thus land is cleared for farming and cattle breeding. The painful part is the cleared land that is no longer used simply because the soil is void of nutrients. It is a pitiful sight.

Blame the Companies, or Blame the People

Which got me thinking. When discussions go on about the destruction of the world, we tend to finger point at governments and big companies. I guess you could say the governments/companies are seen as devils. Devils that we don’t identify ourselves with. Devils that are far from our homes and intangible, yet whose actions strongly influence our daily lives. We blame them for the destruction of natural environments and polluting our earth. Let’s imagine that these devils are not institutions, but actual people. Because that is, basically, what they are. Institutions are nothing. They are a building, or words on paper. But the destruction is done by people, not by a building or a piece of paper. The problem with this thinking, critiqued by many, is that instead of pointing elsewhere, we point at ourselves. I truly believe that for change we need to change us: you & me.

Compare it with us living in a democracy thanks to a constitution and laws (and other things, which are not relevant here). We don’t have that democracy because we have papers on which that constitution and laws are written. It’s a basis, yes, of course, but our democracy exists because the inhabitants live by those rules, while others (e.g. police) enforce those laws. Set the paper with the laws written on them on fire, what then? Whether after that fire, the nation moves on as a democracy or becomes an anarchy depends on people, not on a building or a piece of paper.

And, interestingly, I saw that confirmed here. I had entered Ecuador with the idea to check out “those” companies destroying Ecuador because I tend to fall into that trap of blaming that intangible devil just as anybody else. Here, in the south of Ecuador, are no big companies. Just farmers. There is no government destroying the forest, nor a company. It’s done by individual people so they (among other things) can raise a cow.

It’s always beautiful to meet a person that is making a change, setting an example and showing others that it can be done differently. That we can clear forest but also replant it. That we can clear a forest in a way that it’s making money, by selling the wood. Here, they opt for the short-term solution: burn the forest, raise a cow, gain 50 dollars, and clear another patch.

To finish this part with a bit of hope: the government recently passed a law to cut down on this kind of destruction. People now have to get permission to cut trees and for each tree cut, the person has to replant 10 new ones. The words written on paper (the law) gives hope, now it’s a matter of people following that law and/or enforcing it. Time will tell.

Later that day we met El Español, an inspiring man who does his share in preserving nature by having bought a piece of land and replanting it with palmitos.  The palmito (Euterpe edulis) is a palm tree that is cut just for its stem, which is the vegetable known as palm heart or palmito. As the tree is often cut before it bears fruit (which takes 14 years), the species isn’t given time to reproduce itself and as a result the palmito has largely disappeared from the area.

El Español hit the road in South America and roamed around for two years in a car before finding this spot and settling down, some ten years ago. He renovated/rebuilt an old house from the 1950s, which used to be a place for officials and military to spend the night when traveling from the border northbound in a time when there weren’t roads here, just paths, and these journeys took forever.

He could buy the terrain because the mountain is too steep for cattle. He decided to replant the part that did consist of grass with palmitos. He gathers seeds, puts them in a container with tiny holes and leaves the container in a stream for 25 days so the seeds germinate, which he subsequently spreads in the forest. At some parts it works very well, others not. In many places the soil is extremely poor, he showed us the next morning as we hiked the 2.5 kms trail down to a waterfall.

The following day we reached Vilcabamba, and found a nice place to camp at the Ecolodge of Rumi Wilco (book here). It’s a beautiful place along the outskirts of the town. Nice and quiet, peaceful.

It’s run by Orlando and Alicia, biologists from Argentina, who after having worked in the Galapagos for many years found their home here. They loved living here, but also saw the large-scale destruction of the area, exactly because of deforestation, which leads to desertification of the area. They founded a reserve. From their website:

A group of neighbouring landowners to the Falco’s homeland, agreed to pool their own tracts of relatively undisturbed territories and collectively vie for government support in permanently conserving and upgrading the biodiversity contained in them. This support happened when on July 14th 2000, the Ministry for the Environment granted the “Protective Forest and Vegetation” status to their joint lands. A core funding to the project is obtained by the ecolodge, providing houses made of wood, adobe and tile carefully designed besides the reserve grounds and serving a growing number of  travellers. The beauty of this mode of private protection of nature rests with the multiple ways available to responsible tourists for helping out. The mere fact of making a conscious choice for a place to stay, where expenses are being recycled into a profitable conservation effort, is then a kind of ” eco-travelling “. 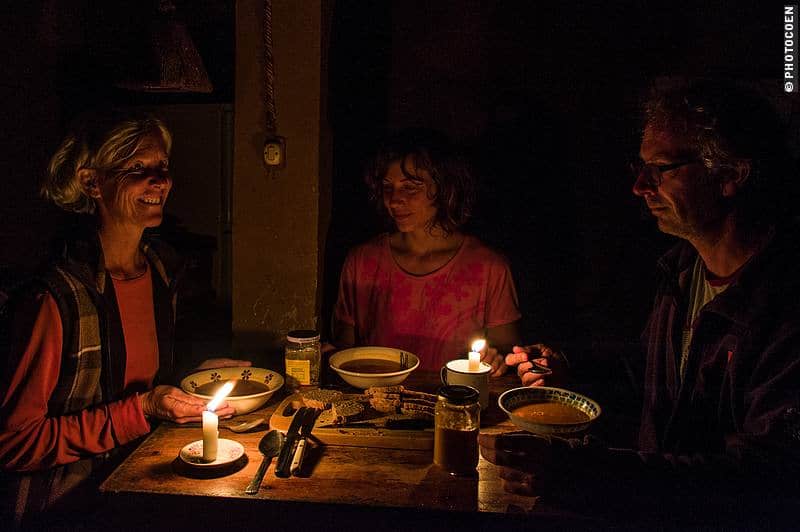 We loved the place, and ended up staying three weeks. It was a place where we met numerous backpackers – as far as we remember that’s a first in South America. Some were volunteers, others stayed for a day, some were searching for a place to settle down. They were all inspiring spirits and we had some interesting conversations about the lives we were leading and/or wanted to lead.

It was just as wonderful to listen to Alicia and Orlando’s stories about their lives here, and the dreams they are realizing. The reserve is a great place for hiking, although we focused more on running in and around the reserve.

And so, all is not lost, I hope, for the region. These were just our first impressions of Ecuador and in order to see the other side of the coin, we decided to visit Podocarpus National Park.

For more on Ecuador, check out these articles: