There is no end in sight to our stay in the Netherlands – thank you, Covid-19. This summer, we hiked the 500K Pieterpad. Next, we worked for a couple of weeks but were soon ready for another trip: cycling in Friesland for week or two.

Time to get away from those laptops again!

Time to add the last unfamiliar Dutch province to his list and so, cycling in Friesland it was.

We asked on Facebook whom we knew in Friesland. Based on the responses I put together a general itinerary and, as divided as our roles typically are, handed the plan over to Coen.

He sat down to finalize the itinerary with a knooppunt route – a Dutch cycling system that allows you to get away from the main road and follow dedicated cycling paths through beautiful surroundings.

Read More: Cycling in the Netherlands

Of course we were aware that we had cycling and hiking paths, but boy, we have a lot in this country.

All alongside each other traversing a region. How amazing is that?

Back to our idea to go cycling in Friesland, on of my favorite provinces in the Netherlands!

Off the Rails – across Russia, Siberia and Mongolia to China – Chris Hatherly & Tim Cope

Contrary to our previous cycling trip, to the central and western part of the Netherlands that we did on e-bikes, we now borrowed bikes from our friends Coen and Diënne. No more cheating! Just using our muscles to get from A to B!

Coen and Diënne are passionate cyclists. Among other trips, they cycled via South Africa (down west and up east) via the Middle East and Subcontinent to Southeast Asia.

“These bicycles have cycled some 60,000 kilometers, so the few you’ll be doing won’t be a problem,” he promised when we sat down at their place for a coffee.

Cycling back from Coen and Diënne’s home to our current home was a mere 30 kilometers but quite a disillusion. I hadn’t cycled properly (on a regular bike) for some 35 years – my body was in for a shock, and hurting!

Ambitious, or ignorant, as I was when planning our trip, our day 1 would cover 115 kilometers. But after this 30-km trip I decided to reschedule it. Coen managed to reduce it to 90 kilometers and I insisted we’d leave at 6 am, giving us ample time with lots of rest stops to reach our destination.

Cycling in Friesland? Seriously? I was getting nervous about this plan of mine – fortunately I didn’t realize at the time that we’d be cycling some 1000Ks!

One thing I did, was to make sure to be one step ahead of a sore bum and we invested in some decent cycling shorts.

6 am turned out to be a good choice even though it was still dark. Hot temperatures were promised – and delivered – for the afternoon. The day started with a gorgeous sunrise and mist lingering low above the grassy fields for the first part of the morning.

To minimize the kilometers, we shortcut the trail through Germany, where our knooppunt route doesn’t work. We battled along a boring main road for a bit (which does have a dedicated cycling path).

We were close to our destination early afternoon and lingered for a couple of hours in the shade of a big tree along the waterfront. It was great to stay with Margit & Jorgos again, like we did during the Pieterpad hike.

Getting up that early once was enough. We took our time for breakfast and coffee before we quickly cycled through Emmen and were back in the woods. We were still in province of Drenthe, which has a lot of forest and heath. It’s a gorgeous province and very popular among cyclists.

New sounds accompanied us. Apart from the still unfamiliar sound of the wide bicycle tires on asphalt, we were driving into early autumn. Acorns and beech nuts popped as we cycled over them.

Travel Guides for the Netherlands

We stopped at Kamp Westerbork, so Coen could see it too. This summer I visited the Westerbork transit camp with my mother, in pouring rain. This time the sky was blue and we took our time to stroll the grounds.

Starting as a refugee camp for German Jews in the 1930s, this became of the ‘Gateway to Hell’ from where Jews were brought after round ups in the Netherlands, and put on trains to extermination camps such as Auschwits and Sobibor. 102,000 Jews and 245 Roma and Sinti were deported; only 5,000 Jews and 32 Roma returned.

The site is incredibly impressive and well maintained. It has a super informative museum, set up to be of interest to all ages. Three kilometers from the museum are the remains of the camps, of which there are few but through explanatory panels, photos, and art work they show the ins and outs of the camp.

I was particularly impressed by the enlarged copies of the last cards people sent to family before being deported, expressing hope that everything would turn out okay.

Via forests, heath and open fields we cycled from Drenthe into Friesland and on to Oldeberkoop, a village with a picturesque, protected villagescape with 900 years of history.

We met our overlanding friends Martine & Andrew, who traveled to Africa in their Volvo C303. So, lots time for travel stories, but also to play our all-time favorite board game of Catan.

Martine & Andrew were early off to work. We could linger as long as we want and close the door behind us. Our legs could definitely use some time off and so lingering we did, throughout the morning, and leaving only around 11 am or so.

We traversed several old villages, typical with a church in the center with a graveyard. Characteristic of the flatlands in the Netherlands are the church spires that you can often spot from afar. Many of them were built before the Reformation as Catholic churches, however, the Reformation was strong in Friesland.

Starting late 16th century, the majority was transformed to Protestant churches – basically meaning that all the gold, glitter and statues were removed, giving the churches a much more austere appearance. These days there are only a few Catholic enclaves left in Friesland.

Unfortunately, churches are often closed (or you have to hunt for the key keeper). However, we also have an extreme interested in graveyards, in fact, throughout the world we stop to check them out because they tell so many stories.

The graves around the churches in the northern provinces of the Netherlands are particularly interesting because some – often around 1800 – often tell the profession of the deceased, giving a glimpse of the types of jobs in those days.

Our destination, the town of Drachten, isn’t a particularly interesting town but probably easygoing and a good (safe) place to raise your kids.

Here we stayed with Jannie & Eddy, Janny being one of my friends from my student years in Leeuwarden. They live incredibly nice, right along the waterfront with space for their boat. After an intense evening of sharing stories it was off to bed.

Full Tilt; Ireland to India with a Bicycle – Dervla Murphy

The hot summer days were over and for cycling that was perfectly fine. But the wind increased and in Friesland, being flat as it is, cycling with headwinds is tough. Our muscles and spirit were challenged an extra notch.

Having said that, I’ve come to truly love cycling over these past couple of months. In my previous life, I hated cycling and took the car for everything. I’d definitely do that differently were I to live in the Netherlands today! It feels great being outdoor so much while having a bit of exercise.

This was a is day of nostalgia because the roads (cycling paths) first took us to Leeuwarden, where I studied Hotel Management in, oh well, a long time ago.

Leeuwarden was the European Capital of Culture in 2018. It was a pleasant city to live at the time, and still seems to be although much busier with thousands of students.

We passed my old home, the villages I then crossed when going for a run. North of Leeuwarden we stopped at the famous iceskating bridge that has been covered in thousands of tiles. They carry images of people who completed one or more of the 15 Elfstedentochten in Dutch history.

The Elfstedentocht is a 200-kilometer long-distance tour skating event that can only take place in very serious winters when the ice is thick enough across the entire distance. It’s a massive event during which the Dutch go totally crazy, in the good sense of the word.

The hamlet of Wanswerd is home to only 180 people, among them Joska & Nico, two fellow overlanders who are totally in love with Africa. In between trips they live here and they love playing the board game Catan as well.

Martine & Andrew didn’t want to miss such an opportunity and drove over for the evening from Oldeberkoop.

We stayed another night with Nico & Joska, using the day for an extra cycling trip around the area including Kollum & Dokkum. You may not expect it (since no international travel magazine ever talks about this region) but in fact, this part of Friesland is incredibly interesting, especially if you like history and cultural stuff – old churches, graveyards, museums, architecture.

It was a hard day of work because the wind was ever increasing and the province hardly gets flatter and more open than here. But it was more than worth the battle; lovely landscapes, luck with churches being open, as well as some interesting monuments along the way.

We were ready to go after great banana-egg pancakes from Nico – a great energy booster. Today we followed the shore of the Wadden Sea, a beautiful seashore and a UNESCO World Heritage Site.

With a strong tail wind it was the absolutely perfect day for cycling. We were flying across the dike, getting a tan from the strong sunshine, admiring the views and the thousands of geese that were migrating across the country and sea for winter.

We stopped for a cup of coffee at De Zwarte Haan (Finisterre aan het Wad), the official starting point of the Santiago de Compostela hike in the Netherlands, a 2000+ kilometer hike to the ‘real’ Finisterre. (by the way, you can sleep in churches en route in Friesland).

As we cycled along the Wadden Sea, I realized there is one more important part of the Netherlands that Coen had never visited: the Wadden Islands.

Check out: Our Long-sleeve T-shirt Collection 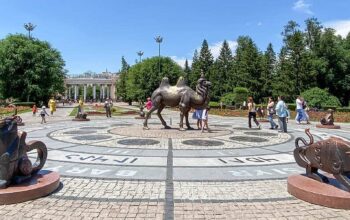