Bake Your Own Bread! Are You Nuts? – Our Coleman Camp Oven (+ Bread Recipe)

Some of you have seen the image on our Instagram: our first homemade bread, fresh from our brand-new Coleman Camp Oven.

It was a success, and ever since we have regularly baked bread. Why would we want to bake our own bread, you may ask? And why after ten years on the road?

If there’s one thing available in most countries, it’s bread.

For bread you need stores, and for stores you need to be a village/town. Often we camp in the countryside and thus can’t buy fresh bread.

Starting in Greece (2003) we learned to stock up on (multigrain-kind-of) biscuits, a reasonable alternative to bread, but when got to the subcontinent (Pakistan/India/Bangladesh), we found only those super-sweet varieties.

In India, we decided it was time to bake our own bread, the local version that is: chapattis. In Pakistan, we had bought a dough roller and a flat, iron griddle to stir-fry food over a wood fire.

One of our hosts in India gave us a cooking lesson and we subsequently baked fresh chapattis on a daily basis.

Making chapattis is as easy as it can get. Mix flour with water until you get the right substance, make thin patties of them and bake them on the griddle. They are delicious when fresh and still warm, but turn dry and hard as stone when stored for the next day.

We got fed up doing that every morning and the whole plan was abolished after a couple of weeks or months.

Our next attempt at preparing some kind of fresh breakfast came years later, in Brazil. We love tapiocas: small pancakes of tapioca flour (a specific kind of manioc/cassava flour). We watched vendors prepare them in their street stall and it looked easy enough: sieve the tapioca, sprinkle a handful of the flour in a hot, dry frying pan, top it with sweet or salty toppings, and there you go.

You can read the long story on this exploration here but to cut it short: We bought a sieve, dug up the frying pan that we hardly used and enthusiastically set to work. However, our attempts initially led to a handful of burning tapioca grains and not much else. We sought a cooking lesson from local friends and learned making the proper flour isn’t as evident as it looks.

We did learn to make reasonable tapiocas after a lot of practice, but truth be told, we found it too much work to do on a daily basis.

Needing it or Not Needing it, That’s the Question

Meanwhile, Coen had read about the Coleman Camp Oven. The discussion on buying one or not had been going on and off for the past 8 years or so.

When it comes to buying stuff it generally goes like this:

KM, who likes an uncluttered car and is totally not into gadgets, immediately resists, retorts with an autopilot response, “We don’t have space,” and, “We don’t need it.”

This discussion goes back and forth for a while, which gives us time to think about it. Sometimes we buy something which indeed turns out to be a waste of money and/or space and gets thrown out rather quickly, while at other times the purchase has been well worth the money and space it takes in the vehicle.

The purchase of our Futura Pressure Cooker was one of these typical discussion rituals that lasted months, eight years ago in India, and turned out to be one of our best cooking equipment we ever bought.

Read More: Why Bring a Pressure Cooker on Your Overland Trip

Why Buy the Coleman Camp Oven?

With the Coleman Camp

the discussion was a bit different as it wasn’t a total ‘yes’ from Coen nor a rigorous ‘no’ from me. We both hesitated. Hence not the discussion for weeks or months, but years.

Were we going to use it at all?

How much space did it take for the few times we might use it?

Our food schedule had generally consisted of eating local (white) bread for breakfast, taking lunch at a restaurant, and skipping dinner or eating .

So why a Coleman Camp Oven?

First of all, we were fed up with the South American white bread rolls, which are often tasty enough when fresh but are empty of nutrition, as well as the so-called whole-wheat bread from supermarkets that are so filled with god-knows-what, and that are so gummy you can roll the bread into a ball and play with it for weeks on end.

Second, during our annual visit to the Netherlands Coen brought me to an outdoor cooking store. We needed to buy a thermos and a set of stainless-steel camping cookware to replace the more-than-forty-year-old aluminum version my parents took on their first camping trips.

This shop also had the Coleman camp oven and I had to admit, yep, in its folded state it doesn’t take much space. Space was no longer the argument. So how about whether we were going to use it?

Neither of us could answer that. As the oven cost a very reasonable 65 euros, we figured it wouldn’t hurt to buy it and try it out for a year. If it didn’t work, we could sell it on E-bay next year.

Having said that, only an oven is not enough. You need baking molds. The oven came with one rack, which is an inefficient use of time and heat so we bought a second. And on that rack you can’t put cookies and I don’t want to use aluminum foil each time so we bought two silicone sheets (or liners). The extra grill and silicone sheets fit in the box.

The baking molds are used to keep the baked bread in as well so they won’t fall apart driving bumpy roads. So, all in all, they don’t take up too much space. The extra bowl we bought to knead the dough in (as our pans are too small for that) has turned out to be multipurpose as well.

Back on the Road

The oven stayed hidden in the bowels of the Land Cruiser for a while because neither of us really had a clue what to do with it. Until we reached Cusco and met Johan and Christa (their website) on the Quinta Lala Campsite.

Christa had been a chef at her own restaurant in Switzerland for years and has always baked her bread, including while on the road. They have a Coleman camp oven as well. So with an expert on baking bread in the same oven as ours, Coen was a happy man.

Christa gave us a list of ingredients, we bought them, and we had a fun instruction morning.

Whole-wheat flour is practically non-existent in Peru (and most of South America). Locals use white flour. Later on, I found (expensive) whole-wheat flour Lima’s organic stores/markets.

Christa pointed out while you can’t find whole-wheat flour, salvado de trigo is a common product, which is the husk of the wheat. In this manner we can sort of create our own whole-wheat/multi-grain version by combining the two, plus a number of other ingredients.

For our first bread we used:

The bread should sound hollow when you knock on it.

Read More: The Stupidest Things Overlanders Brought on their Journey (and the Smartest)

The Coleman camp oven fits on our Coleman stove

. Johan and Christa like baking on a campfire or BBQ and put coals on top of the oven.

One of the difficult issues of this oven is to get the heat evenly divided. You easily burn the bottom of whatever you’re cooking, while the top stays white. Whereas bread is easy to turn around for the last couple of minutes, this is less evident with a cake or potato dish.

Later we read that putting a ceramic tile or pizza stone at the bottom of the oven may help spread the heat more evenly in the oven. That may be next on our list of purchases.

Read More: Why We Cook on Gasoline – the Coleman Stove

Keeping the oven at the right temperature is a challenge for those who depend on cooking outdoors. When it’s cold but especially windy, it is hard to keep the temperature constant. It’s best to secure a spot void of changes in wind or temperature. At one place, high on the Chilean altiplano, we baked inside the Land Cruiser instead, converting the vehicle into a sauna in the process.

So there it is, our story of baking our bread. We enjoy doing it and love eating it. It doesn’t appear to be another whim, like the previous bread-baking attempts, but time will tell.

It figured it would be a good idea how we look back at the purchase of our Coleman Camp Oven, 7 years later. Here are some thoughts:

Check it out: Our Landcruising Adventure Apron Collection 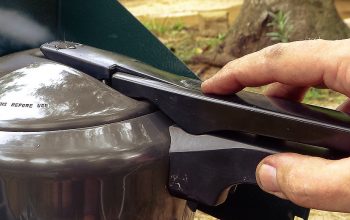 37 thoughts on “Bake Your Own Bread! Are You Nuts? – Our Coleman Camp Oven (+ Bread Recipe)”