“I believe that words uttered in passion contain a greater living truth than do those words which express thoughts rationally conceived. It is blood that moves the body. Words are not meant to stir the air only: they are capable of moving greater things.” ~Natsume Soseki

During our nine-month stay in Japan I deepened my knowledge and understanding of the country thanks to, among many things, these books about Japan. Some are by foreign writers, other are by Japanese authors.

Japan is one of the countries that keep me fascinated and I won’t stop reading about it after I’ve left the country. If you happen to know books on Japan that I should read (and add to this list), please let me know in the comment section below. Thanks!

One of the first books about Japan I read, and I loved it. It details Alex’ 30 years of living in Japan and the changes the country has gone through, giving the reading a good general idea of the country.

We found some of the places mentioned in the book, among which the Chiiori Trust, and knocked on the door but unfortunately, Alex wasn’t home.

Memories of Silk and Straw: A Self-Portrait of Small-Town Japan, by Junichi Saga

The author realized that Japan was changing quickly and that stories about earlier times were getting lost. He set out to find those stories which resulted in his book with beautiful stories about farmers in the first half of the 20th century. A lovely read.

Underground: The Tokyo Gas Attack and the Japanese Psyche, by Haruk Marukami

The book was recommended to me and is on my still-to-read list.

The Brothers; The Saga of the Richest Family in Japan, by Lesley Downer

Fascinating read! The Brothers is the hundred-year saga of the loves, lives and rivalries of one of Japan’s most glamorous business dynasties. Set against the background of Japan’s rise to become one of the world’s most prosperous and technologically advanced countries, this is the epic story of two generations of the Tsutsumi family, famous in Japan as much for their hatred of each other as for their fabled wealth.

Madam Sadayakko; the Geisha Who Seduced the West, by Lesley Downer

This is the true story of the most celebrated geisha in Japan, Sadayakko.  She circled the world when most Japanese had never left the country, became a famous actress when Japanese women weren’t supposed to act and became the real-life model for Puccini’s Madame Butterfly.

Geisha; The Secret History Behind a Vanishing world, by Lesley Downer
I have read my share of books about geishas – the subject does speak to the imagination, doesn’t it? I bought this because I love Lesley’s thorough and detailed accounts in the above-mentioned books, and look forward to reading more written by her.

Read More: How to Prepare your Overland Vehicle for Winter

The Last Concubine, by Lesley Downer

A novel about a romance as romances go, but what I liked about it is how the story gives an idea of the relationship (or lack thereof) between Japan’s royal family and the farmers in the 19th century.

A bold English adventurer. An invincible Japanese warlord. A beautiful woman is torn between two ways of life, two ways of love. All brought together in an extraordinary saga of a time and a place aflame with conflict, passion, ambition, lust, and the struggle for power. An international bestseller, this was one of my favorite books on Japan.

The setting of the book is reminiscent of how the first English navigator reached Japan was on board a Dutch ship that stranded around 1600 in front of the Japanese island of Kyushu. Apart from a great story, it also sheds a light on the world of samurais.

Murakami was recommended to me as a ‘must-read’ author and so I bought this book but I have no idea what to expect from it.

An Artist of the Floating World Paperback, by Kazuo Ishiguro

On my still-to-read list is this novel by the winner of the Nobel Prize in Literature in 2017, this novel is about postwar Japan.

Kokoro and Botchan, both classics by Natsume Soseki

On the Narrow Road to the Deep North, a Journey into a Lost Japan, by Lesley Downer

In 1689 Matsuo Basho, Japan’s greatest poet, set out on his last and longest journey: to the remote northern provinces. Three hundred years later, inspired by Basho’s writing and her passion for Japan, Lesley Downer set off in his footsteps.

With the idea of following Basho’s journey, I learned Lesley had already done so. Reading about how much of that route was already urbanized in the 1970s, I lost my interest in walking this route ourselves, but the book was a good read nonetheless.

The Ramen King and I; How the Inventor of Instant Noddles Fixed my Love Life, by Andy Raskin

On my still-to-read list after the book was recommended to me.

For those who read Dutch I recommend this super informative Japan Landengids by the Dominicus Landengids Series, which includes specific details about Dutch influences in Japan’s history.

Which books on Japan, by Japanese authors or otherwise, have you read? And which Japanese books should I read too? Please share in the comment section below. Thanks.

Check out: Our Bookshop

Check out: The Landcruising Adventure in Japan T-shirt Collection

Would you like to know what book we’re currently reading?

In our newsletter you can find out.

You’ll also stay up to date on our whereabouts, Coen’s latest designs and on what other adventurers are doing. 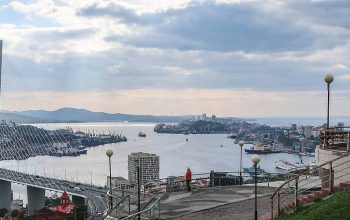