Do We Have Enough Diesel – Blockades in Guyana

We arrive at Mabura Crossing: no petrol station in sight. Shit. What were those guys talking about at Village #58, 12 miles back? They have been out of fuel for the past 3 days due to the protests in Linden, but said we could still get some here.

“Maybe you can buy diesel from a truck driver, which will be expensive, but at Mabura Crossing there is no petrol station,” locals confirm.

Buy from whom? There’s nobody driving here. Ever since the demonstrations started in Linden, about a week ago, the road has been virtually void of traffic. Thus far Lindeners have got their electricity for free (long story, related to the prosperous days of this mining town when housing was paid by the mining company), which they feel has become a right, but now the government wants to bill them like all other Guyanese.

The bigger issue now, or at least what makes people from Georgetown start demonstrations as well (inasmuch as our information is correct), is the fatal shooting of three civilians in Linden by policemen.

Today the funerals will take place. According to a Guyanese law, the police cannot fire at civilians with live ammunition, only with rubber bullets. The police claims to have used those, but these bullets can’t kill people and so the Guyanese are getting angrier by the day. And Linden continues to block the road, which means all transport between south and north Guyana has stopped.

Until an hour ago, to us these were stories that didn’t affect us personally. It was by sheer luck that we had chosen to ferry to Bartica instead of taking the road via Linden. Bartica is still supplied from Georgetown so we fueled up there without a problem. And since the problem was so far removed from our reality, we didn’t think about filling up our second fuel tank. That was stupid, we realize now. The sole petrol station south of Linden is at Village #58, the one we just passed and that ran out 3 days ago. The next one is in Lethem, 354 kilometers south from here. We could just make that, but we want to go to Mahdia first (80 kms one way).

We have to register with the police here at Mabura Crossing before we continue to Mahdia. That’s easy enough: a quick glance at our IDs does the job. “So do you have your ticket for the ferry to Mahdia?” the officer asks. Another stupidity on our part. By now we should know we can’t buy tickets on the ferries. Due to some sort of logic you have to buy them in Georgetown. Kinda far away, not to mention unreachable right now. 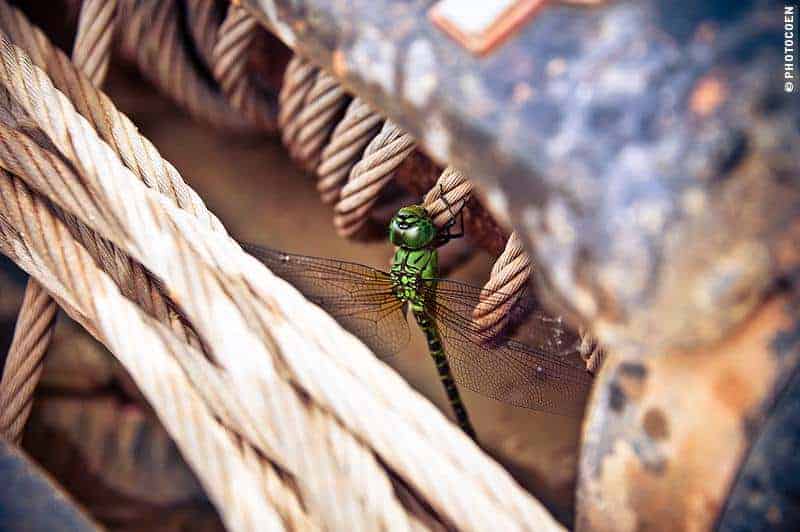 One has to set one’s priorities though, and right now that’s food. We’ve been on the road since 7am, 6 hours ago. Chewy bread for breakfast, snacking on dried pineapple and pistachio nuts along the way. It’s time for a proper meal. I ask if there’s any shop around and get directed to the other side of the street. Crossing is a better word; the town’s name fits its location. It’s a harsh, dry spot in the middle of the rainforest, the red soil baking under a scorching sun.

One restaurant is painted a colorful orange. It doubles as a shop. I can buy a small jar of mayonnaise for the equivalent of 2 US dollars.

“Are you coming from Linden?” a customer wants to know.

I have to disappoint her. Next door is a small wooden hut and the smiles of two girls behind the counter make me walk up to them. Their counter is empty except for two large plastic boxes, both covered with a towel. “Dried banana and fresh pineapple,” they say, giggling and removing the towels to show me.

“Mmm, so how much for the bananas?”

“Making good money here, huh?” I say as I check out the minuscule plastic bags. “Yes, we are,” they respond with big smiles, doubling up with laughter. “Well, now you make a bit more,” I say, glad to be able to contribute something to the sort of economy they have here. Instead of preparing a salad with leftovers from yesterday, Coen has another idea. “This restaurant serves fried rice and chowmein for 1000 (US $5).” The fact that the restaurant has a shady veranda and the Land Cruiser is baking in the sun quickly convinces me. When the chowmein is served the owner apologizes.

“Sorry, only one kind of green.”

It’s crispy pumpkin leaves and stems, which taste just fine. We answer we understand and tuck in. Meanwhile I have a brainwave.

“Why don’t we call Sonia? Maybe she can help us.”

Sonia works for the company that is in charge of, among other things, the roads around the Sherima Crossing (that we took yesterday), the Mango Crossing (we want to take today) and the ferry down to Lethem. She gave us a clearance pass for the ferry to Lethem, which saves us 45 US dollars.

Sonia and her boyfriend Nick have become treasured friends in Georgetown. We met them at the Hash in Paramaribo in Suriname last year and then again during the Nickerie and Baganara Hash. We stayed at Nick’s place and Sonia cooked us a hearty fried rice lunch on a Sunday and spoiled Coen with a tasty cook up curry-nan dish just before we left Georgetown. We consider the options. How do we get a clearance from her? By fax? Coen asks if there is electricity. Nope. Only from 5 to 10 in the evening. That explains the fans not running above the tables and the silence instead of music blasting through Mabura Crossing. No electricity means no telephones either. But hey, this is the 21st century: cell phones! Great. We don’t have one but they may have one at the police post.

Coen, always in charge of such matters, walks up there with Sonia’s number in his hand. I settle down on the veranda with a book, expecting a long wait. When he returns 15 minutes later I see this as a sign that it hasn’t worked; Sonia couldn’t be reached or something like that. “All taken care of,” Coen says.

“Yep. Called her cell. Was referred to her office. Explained the matter to her and she immediately instructed me to drive to the ferry – the next one is leaving in an hour – and she’ll radio them to take us on board and she also said we can spend the night at their camp on the other side of the river.”

The gods are still with us.