Backpacking the Philippines – a Reflection

We were walking on the beach of Port Barton, on the island of Palawan. We reflected on our four-week backpack stint in the Philippines. What happened that we didn’t lose our heart to this country? We agreed the country has beautiful landscapes and super friendly people. We tried to find differences and similarities to our three previous backpacking trips, which all took place during our Asian part of the journey, ten years ago.

As driving our own car in China was too expensive for us we backpacked for three weeks in the northwestern corner of China (around Kashgar). We loved that trip because it was so different from anything else we had seen, but we hated the haggling over taxi fees and depending on buses. The latter prevented us from stopping where we wanted, for a photo, a chat, an overnight stay in a village. Our second backpacking trip started in Yunnan (China), which turned out to be during the first week of May, a Chinese holiday. We were run over by a zillion Chinese on Yunnan’s tourist circuit. We fled west, illegally entered Tibet, which became the success of that trip (until we were evacuated because I had malaria, but that’s for another story).

Myanmar was by far our most successful backpacking trip. We hadn’t minded the busing through the country because we felt we were going from one mind-blowing place to the next (whereas in northwest China we felt there was so much more in between cities). There was not much to choose from in terms of a route because vast parts of the country were (and are, I believe) closed off to visitors.

You sort of ‘had’ to do a loop to see the country’s biggest attractions. And we loved those sites: pilgrimage sites, modern temples, ancient stupas, and beautiful scenery around Inle Lake, and we felt welcome (by the people, not the government). Here, in the Philippines we felt we were stuck on the backpackers trail and we didn’t know how to get away from it. It took us from tourist spot to tourist spot, which does have its attractions, no doubt, but we felt there was so much in between that we were missing out on – – a similar feeling to what we experienced in Northwest China.

While we love the temples and historic sites, what Myanmar is famous for, we’re simply not as much into beaching and snorkeling, which we found to be the main attractions of the Philippines. Of course the country has more to offer than that, and hopefully we will return one day to get a more complete feeling for the country. Even though we were here for four weeks it feels as if we barely touched its fringes. It took time to find a rhythm, to figure out how this backpacking thing worked again. It made us realize how much ‘easier’, all things considered, overlanding is. Apart from bureaucratic hurdles in terms of paperwork for your vehicle, you are much more independent: no need for people to bring you from A to B, to provide you with accommodation, or a meal.

On the positive side, we got to know the ins and outs of all kinds of transport used by the Filipinos, which of course is a fascinating part of traveling. And yes, of course, it wasn’t complete misery; we had fun and met nice people this way.

Yet, the two days on a rented motorcycle felt better to us – a stronger feeling of freedom. When we changed to a plant-based diet a couple of years ago, in South America, we realized that this would affect our travels since in so many countries meat and other dairy products are staples. In South America, however, it didn’t affect us that much because, apart from meat, one of the staples in most South American countries is beans, which perfectly fit our diet. We could find it almost on a daily basis.

In Asia this may be a different matter altogether. Fortunately, in our car we can cook, helping us finding a balance in enjoying local foods and supplementing our culinary needs (mostly non-animal proteins) by cooking them ourselves. When backpacking this is less evident.

Read More: The Philippines on Foot, by Bus, Jeepney and Tricycle

The Filipinos, we learned, eat a lot of meat and surprisingly little tofu (which would have offered a perfect non-animal source of proteins). Local dishes at roadside restaurants hardly ever consist of vegetables alone. Paradoxically we can thank the tourist industry in this respect, because in those restaurants we found dishes such as vegetable curries and stir-fried vegetables.

Not unimportantly was the next issue: We carried way too much luggage. On the previous backpacking trips we had two (bigger) daypacks, but since the Land Cruiser is in the container, we now carried all our electronics plus some stuff bought in the US and Netherlands before coming to the Philippines (which is an in-between-countries stop before we will retrieve the car from the container in South Korea).

I guess the simple conclusion is that we miss our home on wheels. The freedom to go and camp where we want. To (easily) get away from busy tourist spots without spending a fortune on transportation or accommodation.

Is this a rant? Was the trip a disaster? No definitely not. But some parts of our (overall, 13-year) journey just aren’t as fantastic as others – not every country can be #1, so to speak – and so we want to share that part as well. It is by no means to say anything bad about the Philippines as a country, or about backpacking as a form of traveling for that matter.

It’s just that this form of traveling in this country has proven not to be the best combination for us.

We feel lucky to have met beautiful people and privileged to have seen some mind-blowing places. Would/will we go to the Philippines again? Yes, but WITH our vehicle. The problem is that the Philippine law doesn’t allow cars with foreign license plates. Does that make it impossible? Not necessarily. We know of two couples who managed to get permissions through their connections with embassy people and others: the Zapps and Emil and Liliana.

So that will demand another level of preparation which, as the past 13 years have shown, is not something we’re particularly good at. With regard to the beautiful places and people, more on that in the next blog post! 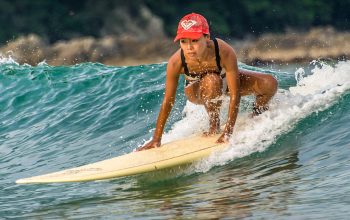 5 thoughts on “Backpacking the Philippines – a Reflection”