The Quest for Batteries in Tashkent (Where are We – Uzbekistan 1)

Our journey in Uzbekistan started with a visit to the far south of the country where there is lots of beautiful Silk Road history to be found in and around Termez, just north of the Afghanistan border. Our trip there, however, was cut short because the household batteries died.

We had been having issues with electricity for a while but, one night, there was a different ‘click’ sound when turning on the water pump. It was one of these sounds that you immediately know: NOT GOOD.

The Need for New AGM or Gel Batteries

The two 70AH batteries we had bought in Ulan Ude – to replace the only two-year-old expensive 105AH AGM batteries – are only 15 months old.

We know why the previous, expensive 105AH AGM batteries died so quickly (which is not relevant here). However, to now having to buy new ones again without understanding the cause of their failure is beyond frustrating (and bad for our budget).

We need two of them as the Land Cruiser runs on 24 volt. While only of the batteries died, we need to replace both because it’s impossible to find the same ones.

Check it out: The Landcruising Adventure Spiral Notebook Collection

It was better to skip a few places on our route and make a beeline to Tashkent, the capital of Uzbekistan (with only a stop in Shakhrisabz), where it is most likely to find decent auxiliary batteries. If lucky, we could score AGM or Gel batteries.

Why the hurry, you may ask. We could perfectly improvise for a while, of course. Well, for one, when something like this happens Coen is too preoccupied with it in order to enjoy other things until the problem is solved. Second, we know solving issues like this generally takes more time than we think.

Third, there are dates looming on the horizon: On November 4, my mother and sister are coming for a visit and when they leave, we have one day left on our Uzbekistan visa.

We’ll head for Kazakhstan where we may have to use the Planar Heater right away because by then it’s late November. For the heater to work we need batteries. Hence the priority of heading to Tashkent as quickly as possible.

The Search for Batteries & a Workshop

We asked for help on Facebook and Instagram and got some suggestions from followers on where we might find AGM or Gel batteries. Thank you all, everybody. It was super helpful!

Fast forward: Three days and 750 kilometers later we wove among brightly painted road obstacles in front of what looked like a military compound. Inside we drove to the far end and met a bunch of guys in blue coveralls; ‘Asia Auto Center’ it said on the backs.

We were here because a few months earlier, during the Land Cruiser overhaul in Bishkek, our ‘master’ (as they call welders here) Nicolai explained to us that auxiliary batteries shouldn’t be hanging below the wheel arch but should be fixed directly to the frame. He made two very nice, strong boxes to house the individual batteries.

These boxes were fit to order and not catered to hold future, bigger-sized batteries. But knowing ours were just over a year old we figured we’d solve that when the time would come to buy new ones.

What else do you need to keep your overland vehicle on the road:

The Construction of a Battery Holder

Now that time had come, way too quickly, and we couldn’t find the same-sized batteries. All were bigger. So our next quest was to find someone who could build a proper, future-proof battery holder.

Deniz and Nikita took the lead when Coen tried to explain that we were in need of some sort of bracket for the new batteries.

“Where are the batteries?” Deniz asked.
“I haven’t bought them yet,” Coen replied. “I first wanted to look for someone who can help us out with a battery holder, preferably on the frame of the Land Cruiser.”

“But if we don’t know the size, how do you suppose we can build a box?”
“Well, I have seen three AGM/Gel battery options online that might be suitable. Maybe we can call them and find out the sizes and go from there.”

“Okay, give me the phone numbers,” he said while looking around for something to write on.

Meanwhile his coworker Bagrom unrolled an old piece of plastic carpeting under the Land Cruiser and Coen changed into my coveralls. Together they determined that if they relocated the diesel water separator and the ampere monitor shunt, that would create at least 70 centimeters of space on the frame right under the driver’s seat and footwell.

The big question was how to place the batteries in such a holder that would still allow Coen to access the connectors.

“We’ll figure something out,” Nikita said. “Leave it to us. Look around and see what kind of work we do here.”

This place is a giant playground for gear-and-petrol heads. It feels like being on a movie set with the A-team. There are giant trucks lined on two sides of a big square of familiar brands: Kamaz, Gaz, Maz, Zas, and Uaz. On opposite sides are warehouse-like buildings with enormous doors. Near the entrance, mechanics were toiling on enormous trucks.

One of them explained that they just swapped out the V6 of a Gaz and that he was filling the void with an even bigger V8 Maz engine. Overhead, a crane is whizzing over rails across the ceiling of the hall. The oil-stained floor is covered with familiar tools, however, in sizes Coen has never seen before – so big. The far end of the hall is dedicated to engines, gearboxes, and differentials.

Where to Find Gel Batteries in Tashkent

On the other side of the square are a dozen, brand-new UAZ Buhankas rolling out of storage. They are all crew-cab pickups intended for military use. Actually most, if not all, vehicles here are militaria. Later Deniz confirmed this is indeed a military maintenance workplace, just not the arms’ section. This bodywork section deals more with building and converting trucks into search-and-rescue vehicles or armored money trucks.

After a quick lunch Nikita came up with a drawing of how he thought it might work. But first we needed exact sizes and weights before metal could be cut. Deniz phoned the companies and got answers. We made our pick, the Gel batteries were quickly delivered and work has been on its way ever since.

Camping in the Workshop

We are camped on the premises and, once more, have met the kindest people we could hope for. They work as a team, have fun together, ordered us laghman (noodle dish) on the first evening after having toasted on a couple of cognacs together. Karin-Marijke has time and space to work on the computer and finds plenty of distraction with the half dozen puppies running around.

We have confidence the new system will be in place and working before we’re off on a ten-day sightseeing tour to the Silk Road jewel cities in Uzbekistan with Karin-Marijke’s mother and sister.

More on that in our next update. Stay tuned!

Check it out: The Landcruising Adventure Sticker Collection 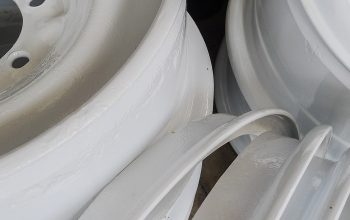