What’s in that Green Box?! – Our List with Additional Equipment

This must be FAQ #1 by officials, whether at border crossings or checkpoints run by police officers, soldiers or – in Venezuela – the national guard:

“What do you carry in that green box?”

Coen will generally answer something like, “Explosives. Dynamite and stuff, you know,” managing to keep a straight face when saying it.

In Asia I worried about this sense of humor and begged Coen to be honest. He was, once. In Laos. To cut a long story short, we had been detained by policemen in Laos, in a hamlet in the rainforest. Coen had managed to stop the drunk officials from nagging us in the middle of the night with the promise they could search the Land Cruiser the next morning if they wanted to.

Read More: How to Deal with Police Officers when Overlanding Of course, the green box was the topic of speculation and I nudged Coen, whispering, “Just be honest.”

“Camping gear,” he answered honestly to their question as to what was in that box. This time there was no smile, no incredulous looking face, no hearty laugh.

“Open it,” and the soldier’s face supported his words. This was an order, not a request.

Coen instructed the soldier to climb on the roof with him in the bloody heat (we were not allowed to move the car to the shade and it was so hot you could fry an egg on the hood, even at 8 am). Coen opened the box, put the snorkeling gear on his head, saying, “For swimming.”

The group of officials – and curious locals who had meanwhile gathered around us – started laughing and we were free to go.

I learned my lesson and have let Coen deal with all bureaucracies and annoying officials ever since.

As I told you in this blog post on our Ultimate Road Trip in Venezuela, Coen opened the box (similar to the Pelican boxes with pressure valves) one morning and found everything wet, the lower stuff floating in the water.

I sorted out everything while Coen opened the Land Cruiser’s first-aid kit, got the Sikaflex – where would we be without this stuff! – and filled the openings around the bolts with which the box is fixed to the roof rack.

It took a day to get everything dry because we had to continuously drag everything from the laundry lines and throw it into the Land Cruiser because of rainstorms. Coen knows how to pack. Men, what a load of stuff do we carry in that box (not everything is in this picture…)! On a separate note: Coen designed this super mini awning. He glued a rail on the back of the car, and bought a four-season, waterproof tarp that he sewed to the keder.

When traveling in hot climates, our warm-weather clothes go in the green box, and the other way around. Among them are sweaters, shawls, gloves, woolen socks, and – yes, arguably the most charming of all – a flannel pajama for me.

Some of this we’ve been carrying – and using – since we left the Netherlands in 2003 and deserve separate attention. Like Coen’s blue, long-sleeved North-face shirt with the hidden zipper at the breast pocket which he wears a lot in colder temperatures. It is still in perfect condition and stains come out easily.

We should have bought more of those, although we have to say that since Pinewood outfitted us with some awesome outdoor gear, we have found a perfect alternative. Second is our thermal underwear. I had never heard of this before our departure and Coen had insisted I should buy it. That may have been his best advice to me in terms of packing for this trip. I love it and have lived in it for weeks on end when in Turkey we were caught by surprise by a thick layer of snow, but also a lot in South America.

Before setting out on our 47-day hike on the Baekdu Daegan in Korea, Armadillo outfitted us with perfect thermal underwear and we look forward to using it again on our 400-mile hike in Jordan where the nights in the mountains will be cold. While normally we don’t have two cms of water in the green box, it may get humid because of condensation. The woolen clothes – and the down sleeping bags – soak up that humidity, which ruined our first set of beanies, gloves and shawls. We bought our second set in Bolivia to prepare us for the cold on Salar de Uyuni.

To protect the woolen and down stuff better, we bought these 13 Liter Sea to Summit Ultra-Sil Nano Dry Sacks (Edited to add by Coen: yeah I know who invents these product names). The stuff that was in there today, when there was so much water in the green box, was slightly humid. Another advantage is that you can squeeze out all the air, saving a lot of space with what otherwise is quite bulky stuff to keep.

And, not unimportantly, in winter we keep our Landcruising Adventure T-shirts in the green box, waiting for next spring. The biggest chunk in the box is taken up by camping gear, mostly for the occasional multiple-day hike.

For years we had a Lafuma 80 Liter and a Deuter 50+10 Liter backpack, which we not only use for hiking but to haul our stuff to and from the Netherlands each year as well (read about it here, in which Coen also discusses his newly purchased Optimus Hiker Plus stove which is not in a photo in this blog post).,

But before we set out on our Baekdu Daegan Hike in Korea, it was time to ditch Coen’s worn backpack and mine, which was quite heavy. Over the years new designs have conquered the market and we both settled for smaller, more lightweight Montane backpacks. In 2003 Coen packed his tiny 2-person Coleman Cobra tent (that is still available, but unfortunately not in the US) that he had bought for his motorcycle trips. It was perfect for multiple day hikes, but in Torres del Paine we discovered it was leaking and Coen glued all the seals again with Seam Grip. Truth be said, the tent was gone and so, for the Baekdu Daegan hike, we also bought a new tent: a Mo Trail Tarptent.

We carry a Primus multiple-fuel stove that has worked well on hiking trips. We’ve used small gas containers as well as gasoline to cook on. We left the Netherlands with two inflatable mattresses which we ruined in no time by sleeping on them inside the car, where there are too many rough edges to damage them on. We constructed a totally different sleeping system inside the car after that.

From other travelers we got the tip we got the tip to buy three-quarter-long inflatable mattresses (we got the Thermarest Prolite Small, which is the 3/4 size) for hikes, as it saves space and weight, which is what we did. They have served us well during our hikes in Patagonia. My contribution in hiking gear when leaving the Netherlands was two down sleeping bags that I got in the 1990s. For me this is the most important thing to invest in for camping trips: a sleeping bag that is warm enough. Nothing can ruin a hike so much as not being able to sleep because you’re cold! However, they have started to wear and recently we received two Big Agnes sleeping bags, which we’ll be testing our upcoming Jordan Trail hike.

In Pakistan we bought two silk liners for the equivalent of 5 euros. We mostly used those when sleeping in cheap (not too clean) hotels throughout the subcontinent and in Southeast Asia. By the time we got to Vietnam they started to wear, but fortunately, we could buy new ones in Vietnam as well for little money. They are still in good condition. A tent is perfect for colder climates such as in Patagonia and the Andes Mountains, but not in the rainforest. Here, people sleep above the ground. It’s cooler and free from nasty crawling creatures. A hammock is the way to go, but that’s not enough in the tropics. You need a mosquito netting as well.

For this you have beautiful, fancy integrated models which seem just perfect for the type of outings we did, but unavailable in those countries (meaning, we didn’t see them anywhere). So, for hiking trips in French Guiana and to Suriname’s interior we bought local hammocks and mosquito netting, which have served us well.

We carry a bit of car gear is in the green box as well:

Read More: How to Ensure a Good Container Loading of your Car At the end of the day we were done: everything was dry, we had taken a number of things out (did we need three woolen shawls or 3 gas canisters that had started to rust? Nope). I left it to Coen to repack everything in an orderly manner so everything fit in that green box again.

You’ll also stay up to date on our whereabouts, Coen’s latest designs and on what other adventurers are doing. 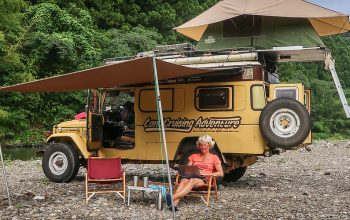 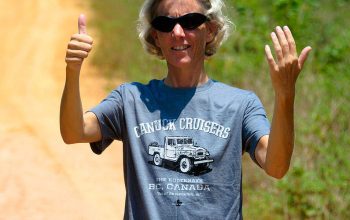